On Children's Art - The School Of Life

For almost all of human history, it has been unthinkable that someone could lay claim to maturity, sanity and reliability by pinning a picture by a six-year-old to the walls of their office, or throne room. At least until the 20th century, the art that won prestige showed great command of technical skills and a sensitive fidelity to the real appearance of things. 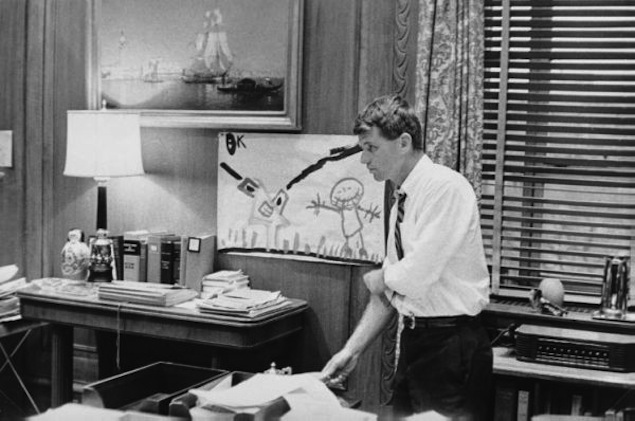 Child’s art in the office: pioneer Bobby Kennedy, in the early 1960’s

What is it about children (reflected in their bold, vivid, and utterly distorted and wonky drawings) that we now see special merit in? We know casually that children – and their art – can be very sweet. But what is really going on beneath that word ‘sweetness’ and quite why do we seem to need this quality so much at this point in history?

The work below was done by Noah. He is five and three quarters and lives in Durham, England. His father, who is a regional manager for a supermarket chain, has it prominently in his cubicle at work. The art shows mum, dad, Noah and little brother James. It is raining, as it often does in that part of the world. But the mood is decisively upbeat. The artist seems broadly extremely optimistic about the human condition. 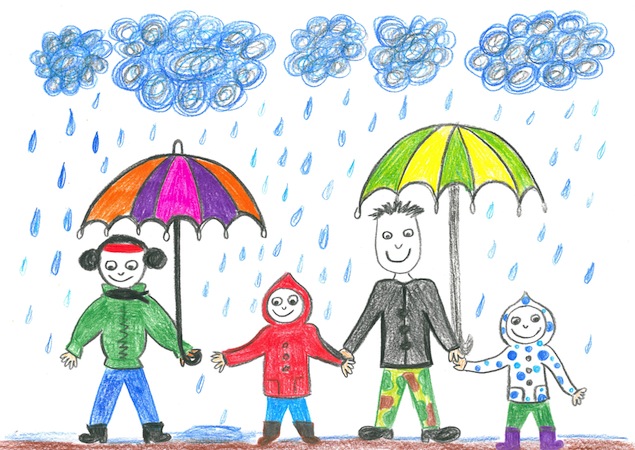 More valuable than the Mona Lisa

What often touches us in the art of children are a host of qualities that are deeply under threat in adult lives and yet which we unconsciously recognise as precious to a sense of inner balance and psychological well-being. The sweet is a vital part of ourselves – currently in exile.

One of the most recurring features of children’s art is evidence of trust. So long as things have gone reasonably well, children can believe in surfaces: if mummy smiles, she must be OK. There is, at a young age, blessedly little room for ambiguity. Children are not always trying to peer below the surface and discover the compromises and evasions that belong to maturity. Their art functions as a highly necessary corrective to cynicism.

Adult lives seldom allow us not to be wary and suspicious. We grow to expect trouble to come from any direction. We are aware of the fragility of things; and how easily safety and hope can be crushed. It is rare to have fifteen minutes without being submerged by a new wave of anxiety. It is therefore understandable if we turn with relief to the trusting attitude of those great diminutive artists, as brilliant at lifting our spirits as they are hopeless at delivering correct representations of an oak tree or a human face.

Noah’s picture is full of hints as to what we deeply need. For a start, we need to be more willing to suppose that most other people are really quite nice. A touch of cynicism is – obviously – highly useful. It’s just that collectively we have talked ourselves into giving a cynical attitude too much prestige. It crowds out other things we require. And children’s drawings have become our contemporary way of smuggling them in.

Another endearing and psychologically necessary quality of children’s art is quite how inaccurate it tends to be. A traditional assumption of drawing is that being ‘good’ at it requires one to lay aside the demands of one’s own ego in order to pay precise attention to what is actually out there. The artist must learn how to observe the world, and in order to do so, must put a lot of themselves to one side. 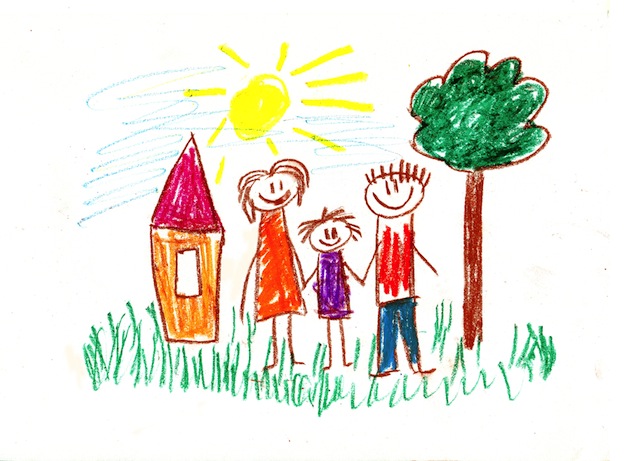 Yet the child responsible for the scene above hasn’t tried to look objectively at a tree and work out just how a branch is attached to a trunk, or what precise shape a leaf is. Rather than being in any way painstaking or faithful, the child is gleefully unconcerned as to the true facts of the world.

What is sweet is this daring lack of interest in ‘getting it right’ which symbolises a delightful freedom from concern about whether others will think it right or not either. Again, the term sweetness is our way of acknowledging that this is something we need to do a little more of in our own lives, but find very hard to ask for directly.

It’s totally understandable that we learn, as adults, to accommodate ourselves to the needs of reality and of other people. But we can devote ourselves to this goal with so much zeal, our souls dry up.

This painstakingly beautiful drawing was done by the English 19th century artist and critic John Ruskin. Ruskin, like many artists, saw drawing as a process whereby we properly attend to the singularity of things out there in the world. He saw the great artist as a paragon of ‘unselfishness’, caring more about the proper appearance of a leaf than the demands of his or her own ego. He was keen that children learn to draw ‘properly’ from a young age (four was not too young in his eyes). He did not ascribe any value to their untutored, spontaneous ‘scribbles’. He was – in a sense – right, and at the same time, profoundly wrong… 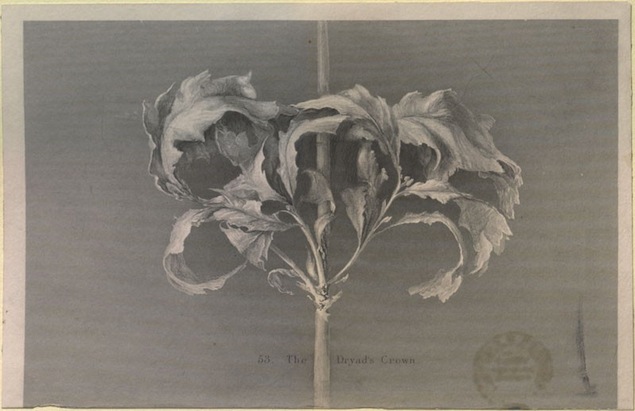 Children are sometimes at their sweetest when they suggest schemes that adults know are utterly impractical. A five-year-old thinks it would be nice to have a career that combines being an astronaut with being chef for his mum; his sister plans to keep an elephant in the garden; a boy says he’d like to marry his elder brother, another that he wants to invent a machine that will allow him to reverse time. Rather than dismissing these as idiotic or impractical ideas, we are frequently enchanted when children talk, as they often do, with great earnestness about their plans to reform or improve on the conditions of life.

The sweetness lies in the way their thoughts have not yet had to be tested by experience. They can still make utopian leaps, without censoring themselves. Our pleasure is a sign that we, the adults, have grown painfully short on this freedom ourselves. We find it poignant and touching to witness their ideas (a plan to make the biggest bridge in the world out of Lego or to invent an airplane that runs on water) because we realise that we have crushed this faculty of freedom a little too rigorously in ourselves. 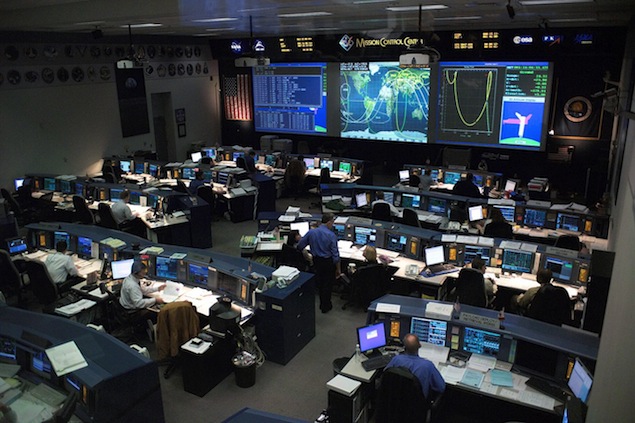 It is not, in fact, strange that it is this period of human history that has been the first to get really interested in the sweetness of children.

Societies get sensitive to things that they are missing. We live in a world of highly complex technology, extreme precision in science, massive bureaucracies, insecurity and intense meritocratic competition. To survive with any degree of success in these conditions, we have to be exceptionally controlled, forward-thinking, reasonable and cautious creatures. However, we tend not to identify what has grown in short supply in our lives head on. It would be rare to say: we need more flights of fancy, more innocent trust, more gleeful disregard of expectations… We have forgotten that this is what we even want. Instead, we simply find it moving – in fact sweet – to encounter these things in symbolic forms in the scribblings of a child.

Children’s art provides an opportunity to start to get to know our own needs. They are, in their own way, political demands, compact manifestos for some of the things we urgently need a little more of in the anxious, compromised conditions of contemporary adult life. 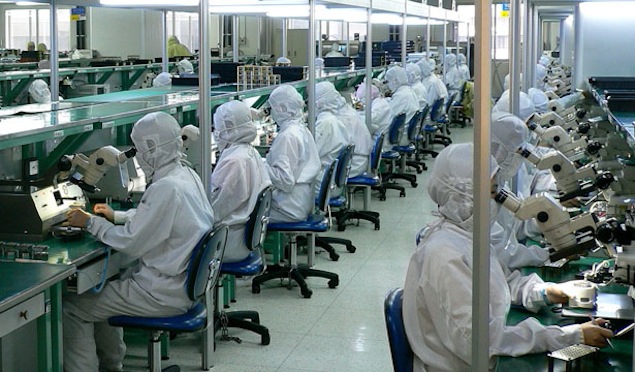 Against such a backdrop, children’s art is no longer just endearing, it is positively necessary