Matsuo Basho - The School Of Life

In the West, we have a vague sense that poetry is good for our ‘souls’, making us sensitive and wiser. Yet we don’t always know how this should work. Poetry has a hard time finding its way into our lives in any practical sense. In the East, however, some poets—like the 17th-century Buddhist monk and poet Matsuo Bashō—knew precisely what effect their poetry was meant to produce: it was a medium designed to guide us to wisdom and calm, as these terms are defined in Zen Buddhist philosophy.

Matsuo Bashō was born in 1644 in Uego, in the Iga province of Japan. As a child he became a servant of the nobleman Tōdō Yoshitada, who taught him to compose poems in the ‘haiku’ style. Traditionally, haikus contain three parts, two images and a concluding line which helps to juxtapose them. The best known haiku in Japanese literature is called ‘Old Pond’, by Bashō himself:

It is all (deceptively) simple – and, when one is in the right, generous frame of mind, very beautiful.

After Yoshitada died in 1666, Bashō left home and wandered for many years before moving to the city of Edo, where he became famous and widely published. However, Bashō grew melancholy and often shunned company, and so until his death in 1694 he alternated between travelling widely on foot and living in a small hut on the outskirts of the city. 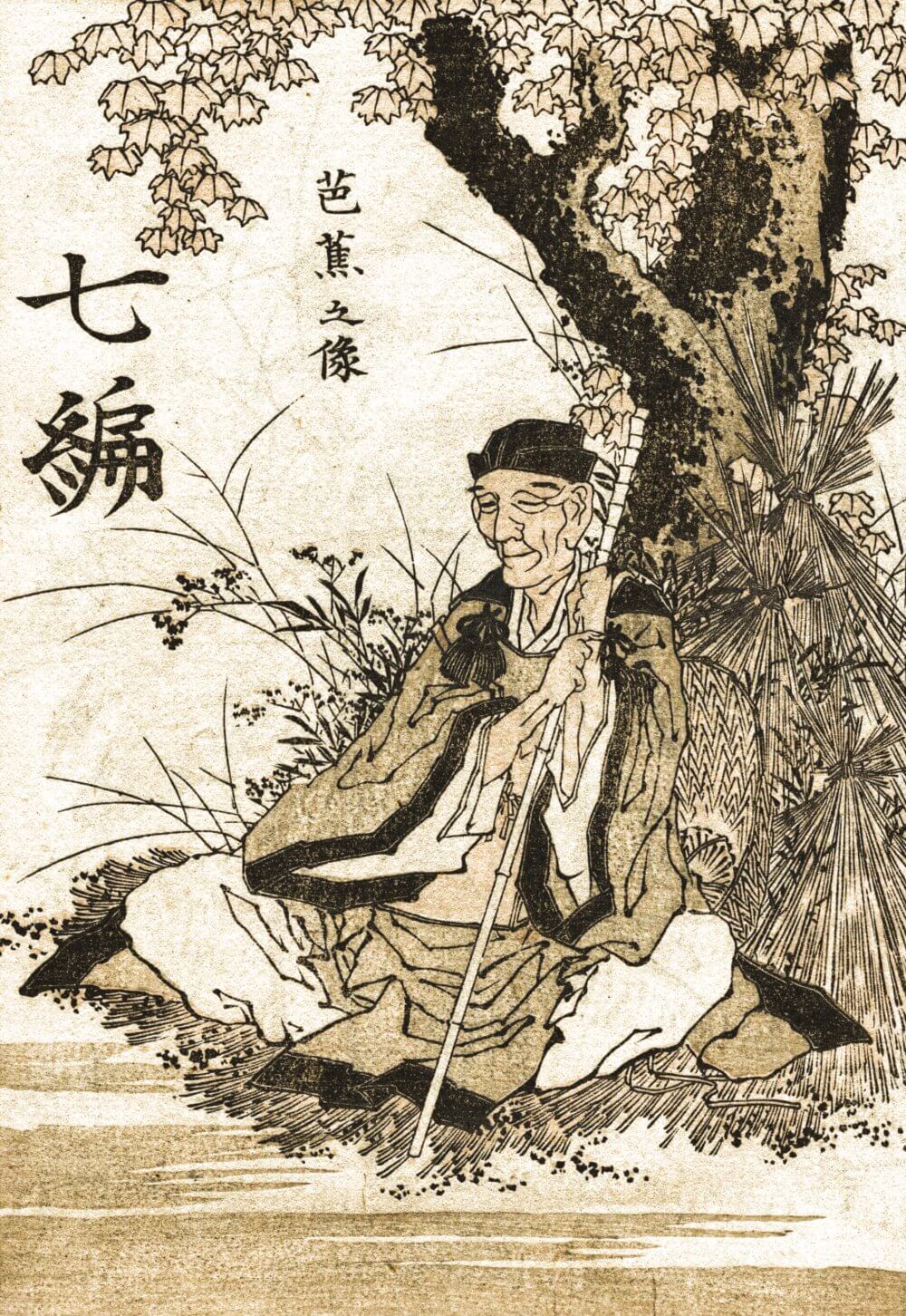 Bashō was an exceptional poet, but he did not believe in the modern idea of “art for art’s sake.” Instead, he hoped that his poetry would bring his readers into special mental states valued by Zen. His poetry reflects two of the most important Zen ideals: wabi and sabi. Wabi, for Bashō, meant satisfaction with simplicity and austerity, while sabi refers to a contented solitude. (These are the same mindsets sought in the well-known Zen tea ceremony defined by Rikyu). It was nature, more than anything else, that was thought to foster wabi and sabi, and it is therefore unsurprisingly one of Bashō’s most frequent topics. Take this spring scene, which appears to ask so little of the world, and is attuned to an appreciation of the everyday:

Bashō’s poetry is of an almost shocking simplicity at the level of theme. There are no analyses of politics or love triangles or family dramas. The point is to remind readers that what really matters is to be able to be content with our own company, to appreciate the moment we are in and to be attuned to the very simplest things life has to offer: the changing of the seasons, the sound of our neighbours laughing across the street, the little surprises we encounter when we travel. Take this gem:

Violets—
how precious on
a mountain path

Bashō also used natural scenes to remind his readers that flowers, weather, and other natural elements are—like our own lives—ever-changing and fleeting. Time and the changing of weathers and scenes need to be attended to, as harbingers of our own deaths:

This transience of life may sometimes be heartbreaking, but it is also what makes every moment valuable.

Bashō liked to paint as well as write, and many of his works still exist, usually with the related haikus written alongside them. This one depicts the above haiku. (“Yellow rose petals…”) 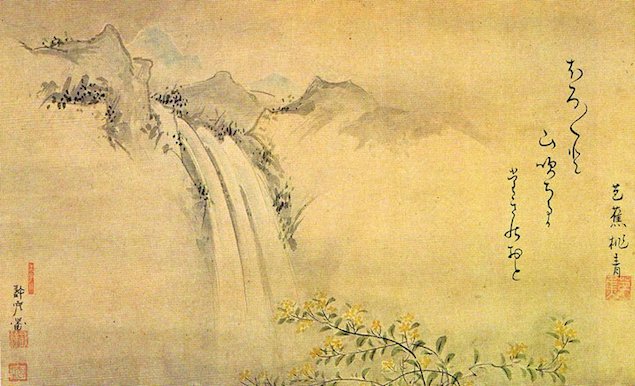 In literature, Bashō valued “karumi,” or “lightness”. He wanted it to seem as if children had written it. He abhorred pretension and elaboration. As he told his disciples, “in my view a good poem is one in which the form of the verse, and the joining of its two parts, seem light as a shallow river flowing over its sandy bed.”

The ultimate goal of this “lightness” was to allow readers to escape the burdens of the self —one’s petty peculiarities and circumstances—in order to experience unity with the world beyond. Bashō believed that poetry could, at its best, allow one to feel a brief sensation of merging with the natural world. One may become – through language – the rock, the water, the stars, leading one to an enlightened frame of mind known as muga, or a loss-of-awareness-of-oneself. 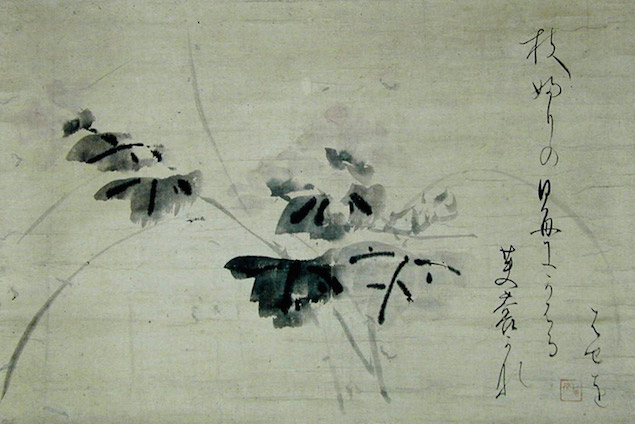 “Hibiscus with Haiku” by Bashō

We can see Bashō’s concept of muga or self-forgetting at work in the way he invites us almost to inhabit his subjects, even if they are some rather un-poetic dead fish:

Fish shop
how cold the lips
of salted bream

In a world full of social media profiles and crafted resumes, it might seem odd to want to escape our individuality—after all, we carefully groom ourselves to stand out from the rest of the world. Bashō reminds us that muga or self-forgetting is valuable because it allows us to break free from the incessant thrum of desire and incompleteness which otherwise haunts all human lives.

Bashō suffered for long periods from deep melancholy; he travelled the dangerous back roads of the Japanese countryside with little more than writing supplies, and he spent some truly unglamorous nights:

Fleas and lice biting;
awake all night
a horse pissing close to my ear

Yet muga freed Bashō—and it can also free us—from the tyranny of glum moments of individual circumstance. His poetry constantly invites us to appreciate what we have, and to see how infinitesimal and unimportant our personal difficulties are in the vast scheme of the universe. 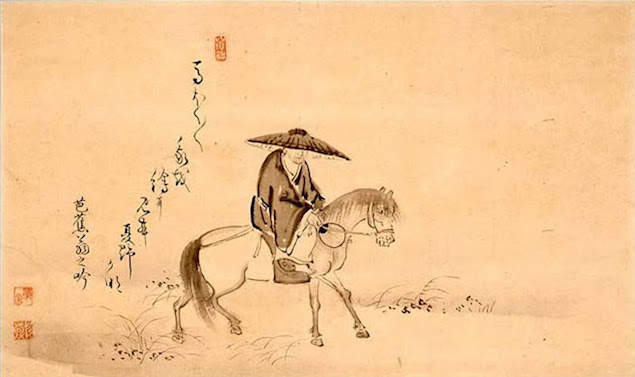 “Bashō riding a horse” by his follower Sugiyama Sanpu

Bashō’s poetry was a clever tool for enlightenment and revelation – through the artfully simple arrangement of words. The poems are valuable not because they are beautiful (though they are this too) but because they can serve as a catalyst for some of the most important states of the soul. They remind both the writer and the reader that contentment relies on knowing how to derive pleasure from simplicity, and how to escape (even if only for a while) the tyranny of being ourselves.