Matthew Arnold - The School Of Life

Matthew Arnold was the most important educational reformer of the 19th century. He realised that, in the modern world, education would be one of the keys to a good society. But it had to be education of a special kind – and not one that we nowadays necessarily recognise or strive for. Instead of saying that schools should teach more trigonometry or improve the literacy rates in particular socio-economic percentiles, Arnold advocated a strange sounding, but deeply sane and necessary, agenda. Schools should promote – as he put it – ‘Sweetness and Light’. It was a turn of phrase calculated to irritate his contemporaries, but it neatly captured what he was trying to do – and what we might be inspired to try in turn. 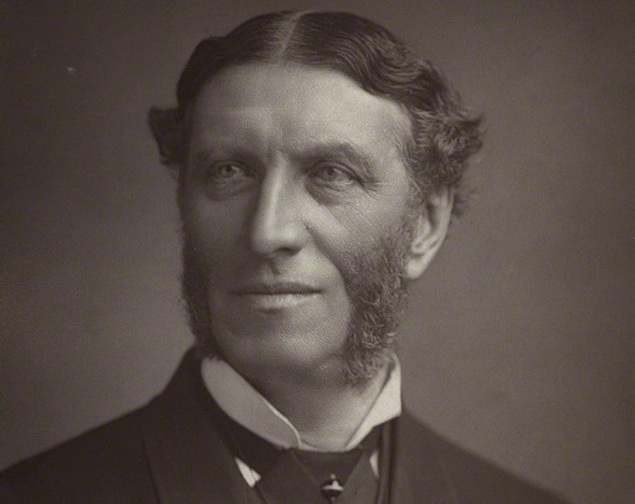 In his lifetime, Arnold was a laughing stock for some of the newspapers of Britain. The Daily Telegraph in particular constantly teased him for being pretentious: ‘an elegant Jeremiah’ as they put it. Whenever there was a strike or a riot, they imagined Arnold earnestly telling people not to fuss so much about vulgar, practical things like unemployment or low wages, and instead to raise their minds to higher ideals and concentrate on ‘Sweetness and Light’. It was a deeply unfair criticism (as we shall see) but there was just enough in Arnold’s character to make it stick. It reveals just how easy it is to come across as fey, out of touch and inconsequential when one is trying to stand up for fragile, slightly complicated things.

Matthew Arnold was born in 1822. His father, Thomas Arnold, was a major intellectual celebrity of his times: a tireless, immensely active and stern headmaster of Rugby public school, who had a starring role in Tom Brown’s Schooldays, one of the bestselling novels of the era. 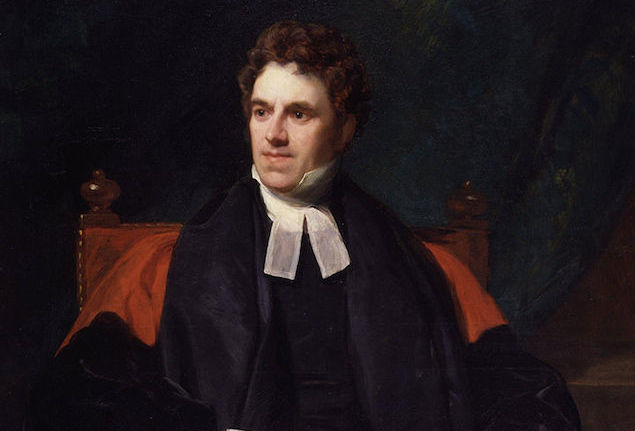 Matthew was a disappointment, and a puzzle, to his father. He liked to read in bed in the morning, he enjoyed strolling through woods and meadows, he was charmed by young women in Paris, he wrote poetry, he neglected his studies and published – to the world’s indifference – a couple of slim volumes of verse. Eventually, he fell in love with a woman called Frances Lucy Wightman – his pet name for her was Flu – the daughter of a judge. But to get married he needed a solid career, so he took up a senior post in the Department of Education as an Inspector of Schools. For years, he travelled the length and breadth of Victorian England, checking whether children were being properly taught. He earned a very respectable salary; the family grew, they went on interesting holidays and lived comfortably and happily in the West End of London – though Arnold was never quite on top of his finances.

Arnold didn’t write a great deal of poetry in these years but his charm (and his late father’s many influential friends) got him elected to the highly prestigious position of Professor of Poetry at Oxford. There was no money attached to the role – but it meant he got to give a series of lectures each year to the opinion formers of the nation. It was to prove the making of him, for it was thanks to his post that he matured into a profound social critic. His best lectures were gathered together into his most important and influential book, Culture and Anarchy (1869). 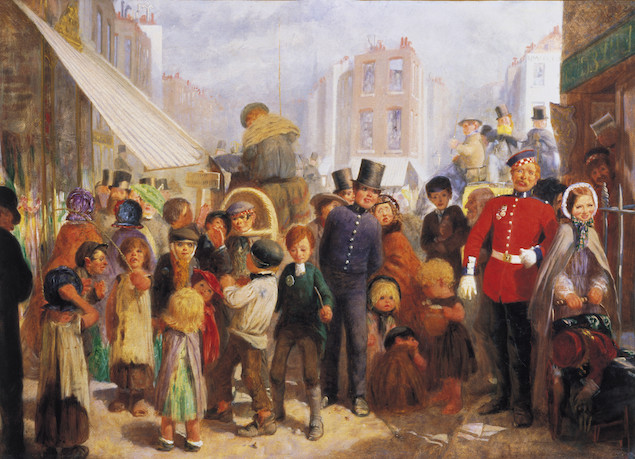 There was a lot that bothered Arnold about the modern world – as it was just beginning to reveal itself. But he summed it up in one embracing idea: Anarchy. By ‘anarchy’, he didn’t mean people in black balaclavas breaking shop windows. Rather he meant something much more familiar and closer to home: a toxic kind of freedom. He meant a society where market forces dominate the nation; where the commercial media sets the agenda and coarsens and simplifies everything it touches; where corporations are barely restrained from despoiling the environment, where human beings are treated as tools to be picked up and put down at will; where there is no more pastoral care and precious little sense of community, where hospitals treat the body but no one treats the soul, where no one knows their neighbours any more, where romantic love is seen as the only bond worth pursuing – and where there is nowhere to turn to at moments of acute distress and inner crisis. It’s a world we’ve come to know well.

Arnold believed that the forces of anarchy had become overwhelming in Europe in the second half of the 19th century. Religion was in terminal decline. Business reigned triumphant. A practical, unpsychological money-making mentality ruled. Newspaper circulation was growing exponentially. And politics was dominated by partisanship, conflict and misrepresentation. 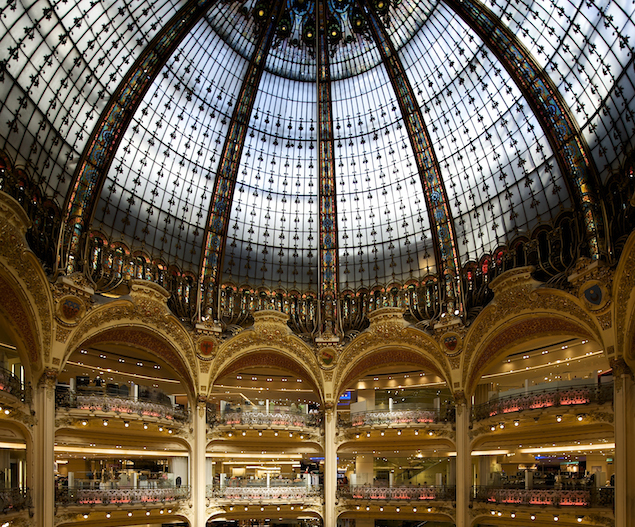 In the past, religion might have served to reign in these anarchic tendencies. But in his best poem, Dover Beach, Arnold described how ‘the sea of faith’ had ebbed away, like a tide from the shore, leaving only a ‘melancholy, long, withdrawing roar.’

What could replace the function that religion had once played in society? What forces might constrain anarchy and civilise, guide, inspire and humanise instead? Arnold proposed one resounding solution: Culture. It must be Culture, he proposed, that would overcome the forces of anarchy inadvertently unleashed by Capitalism and Democracy.

But to play such a role, by Culture one could not simply continue to mean what a lot of people then (as today) understood by the term: namely, an interest in going to art galleries on holiday, watching an occasional play and writing some essays about Jane Austen at school. 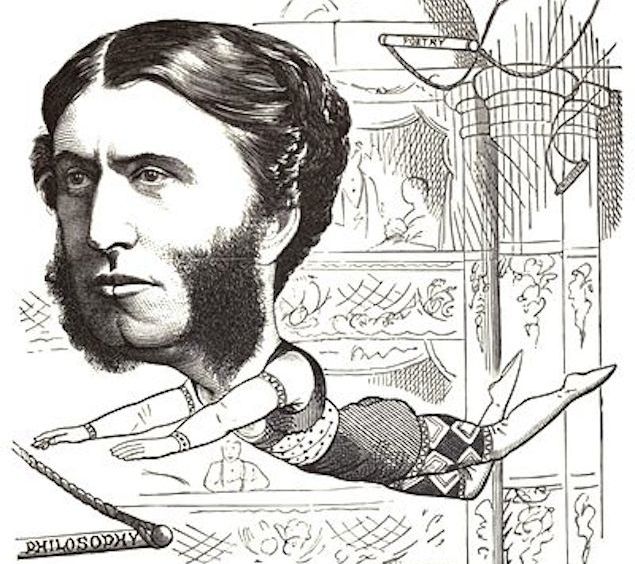 A contemporary cartoon of Matthew Arnold, showing him balancing adroitly between poetry and philosophy

By Culture, Arnold meant a force that would guide, educate, console and teach, in short, in the highest sense, a therapeutic medium. The great works of art weren’t to be thought of as mere entertainment, they contained – when interpreted and presented properly (and this is where Arnold thought his society had gone so wrong) – a set of suggestions as to how we might best live and die, and govern our societies according to our highest possibilities.

Arnold’s goal was therefore to try to change the way the elite establishment (the museums, the universities, the schools, the learned societies) were teaching works of Culture, so that they could become what he felt they had it in their power to be: a proper bulwark against modern Anarchy and the agents to deliver appropriate doses of those important qualities, ‘Sweetness and Light’.

By ‘Light’, Arnold meant ‘understanding.’ The great works of culture have it in their power to clear mental confusion, they give us words for things we had felt but had not previously grasped, they replace cliche with insight. Given their potential, Arnold believed that schools and the mass media had a responsibility to help us get to know as many of these light-filled works as possible. He wanted a curriculum that would systematically teach everyone in the land: ‘the best that has been thought and said in the world,’ so that through this knowledge, we might be able to ‘turn a stream of fresh and free thought upon our stock notions and habits.’ 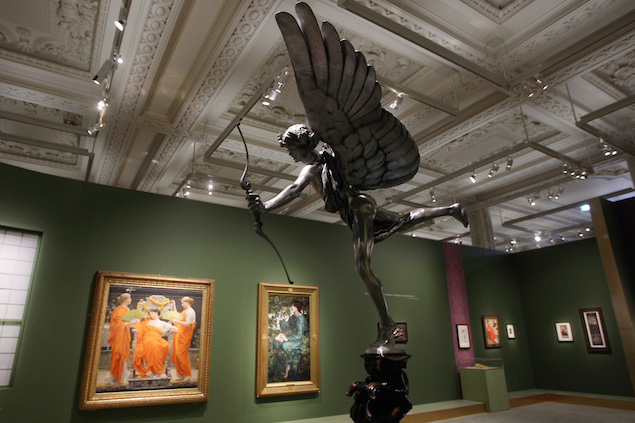 But Arnold was conscious of how the teaching of works of Culture in fact needlessly distances us from their power. Academic commentary grows like ivy around masterpieces, choking the majesty and interest of their message to us. Museums for their part make art sound immensely complicated, abstract and peculiar. As for the big and insightful thoughts that may lie in philosophy, they have frequently been formulated in ways that make it exceptionally difficult to understand them and see their personal import (Arnold had academic culprits like Hegel in mind). So, Arnold tried to impress upon his intellectual contemporaries a project which remains urgent to this day: that of ‘carrying from one end of society to the other, the best knowledge and the best ideas of the time; labouring to divest knowledge of all that is harsh, uncouth, difficult, abstract, professional, exclusive; to humanise it, to make it efficient outside the clique of the cultivated and learned.’

To make it efficient outside the clique of the cultivated and learned. Note how this ostensibly rarefied and impractical commentator had something deeply practical and very democratic in mind. He recognised that, in a populist, market driven society, it was no use keeping culture for the few,  writing books that only a hundred people could understand. The real task was to know how to popularise. If Culture was to be properly powerful, it would have to learn to be popular first.

By ‘sweetness,’ Arnold meant that he wanted works of Culture to be presented to the audience in sweet ways. He saw the absolute necessity of sugar-coating things. In a free society, cultural authority could no longer be strict and demanding – people would simply turn away or vote for something less severe. Anyone who wanted to advocate serious (but potentially very beneficial) things would have to learn the art of sweetness. They would have to charm and amuse and please and flatter. Not because they were insincere but precisely because they were so earnest. In Arnold’s ideal world, the lessons of advertising – which in his day discovered how to sell expensive watches and fire tongs and special knives for boning chickens – would have to be used by intellectuals and educators. Instead of wondering how to persuade middle-income people to purchase potato peelers or soup dishes, they would ponder how to make Plato’s philosophy more impressive or how to find a larger consumer base for the ideas of St Augustine.

By sweetness, Arnold also meant kindness and sympathy. He wanted a world where people would – in the public realm – be nicer to one another. Enough of the brutality and coarseness of the Daily Telegraph, a publication that every day took pleasure in gunning down new victims and turning personal tragedies in to the stuff of mockery. He wished Culture to help foster a spirit of kind-hearted enquiry, a readiness to suppose that the other person might have a point, even if one didn’t quite see it yet. He wanted to promote a tenderness to people’s failings and weaknesses. He saw sweetness as an essential ingredient of a good, humane society.

Culture and Anarchy remains filled with eminently valid answers to the problems of the modern world. With religion gone, it really is only Culture that can prevent Anarchy. But we still have a way to go before Culture has been divested of, to use Arnold’s words, all that is ‘harsh, uncouth, difficult, abstract, professional, exclusive’ about it.

This project is – in its own way – a small contribution to fulfilling Arnold’s magisterial vision.