Confucius - The School Of Life

We know very little for certain about the life of the Chinese philosopher Confucius (a westernised version of his name, which means ‘Master Kong’). He is said to have been born in 551 B.C. in China; he may have been a student of the Daoist master Lao Tzu. According to tradition, he began government service aged 32 and served many roles, including Minister of Crime under Duke Ding in the state of Lu. However, when Confucius was 56, he and the duke fell out over the duke’s excesses, and so Confucius left the court and wandered for 12 years. 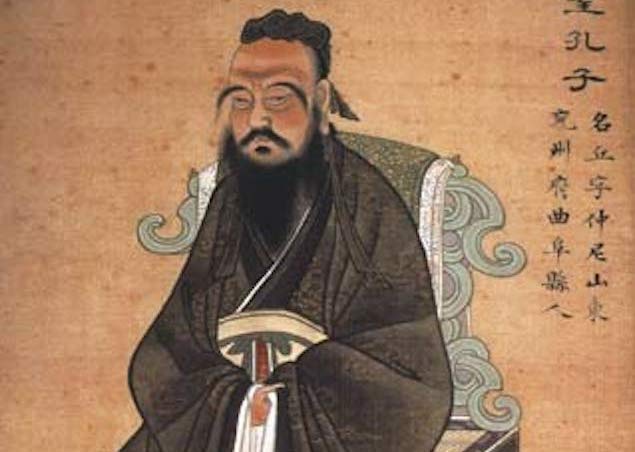 Confucius presented himself as a ‘transmitter who invented nothing’, because he believed he was teaching the natural path to good behaviour passed down from older, divine masters. Around the second century B.C., Confucius’s works were collected into the Analects (Lunyu), a collection of sayings written down by his followers. These are not always commandments, because Confucius didn’t like prescribing strict rules. Instead, he believed that if he simply lived virtuously, he would inspire others to do the same. For example, one of the short passages in the analects is:

The stable burned down when Confucius was at court. On his return he said, ‘Has any man been hurt?’ He did not ask about the horses.

In this simple three-sentence story, we are able to contemplate the implied value of human lives over objects or horses, and to wonder if we would have done the same. 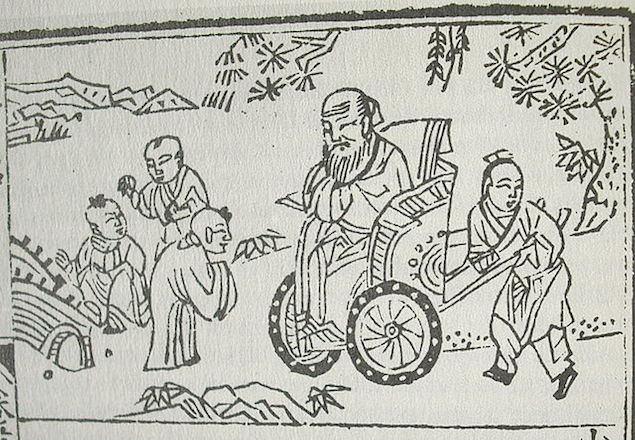 An image of Confucius travelling in a wheelchair from a Confucian children’s book c. 1680

Some of the morals Confucius taught are easily recognisable – most notably his version of the ‘Golden Rule’: ‘Do not do to others what you do not want done to yourself’. But some of them also sound very strange or old-fashioned to modern ears (especially to western ones). We need his advice all the more for this; it serves as an antidote to the troubles we currently face. Here are a few examples of what Confucius helps us remember:

The Analects are a long and seemingly disorganised book of short events, filled with strange conversations between Confucius and his disciples, like this one:

‘Tsze-kung wished to do away with the offering of a sheep connected with the inauguration of the first day of each month.

The Master said, ‘Tsze, you love the sheep; I love the ceremony’.

At first this is baffling, if not also humorous. But Confucius is reminding Tsze—and us—about the importance of ceremony.

In the modern world we tend to shun ceremony and see this as a good thing—a sign of intimacy, or a lack of pretension. Many of us seek informality and would like nothing more than to be told ‘just make yourself at home!’ when visiting a friend. But Confucius insisted on the importance of rituals. The reason he loved ceremonies more than sheep is that he believed in the value of li: etiquette, tradition, and ritual.

This might seem very outdated and conservative at first glance. But in fact, many of us long for particular rituals—that meal mum cooked for us whenever we were sick, for example, or the yearly birthday outing, or our wedding vows. We understand that certain premeditated, deliberate, and precise gestures stir our emotions deeply. Rituals make our intentions clear, and they help us understand how to behave. Confucius taught that a person who combines compassion (‘ren’) and rituals (‘li’) correctly is a ‘superior man’, virtuous and morally powerful. 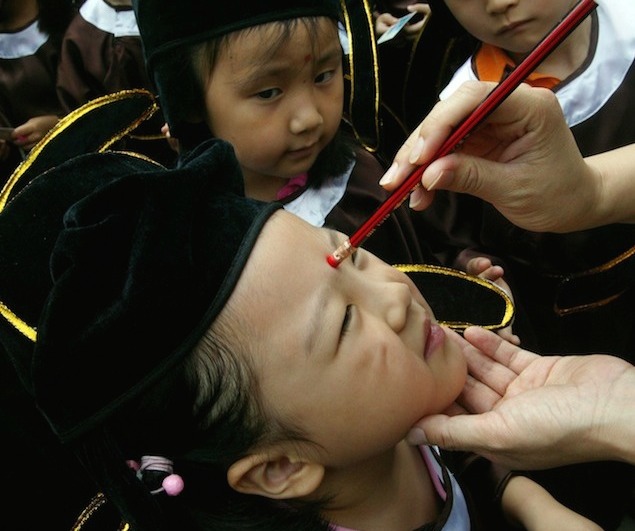 A little girl at a ‘brush-opening’ ceremony at a Confucian temple, in celebration of the girl beginning her education

We should treat our parents with reverence

Confucius had very strict ideas about how we should behave towards our parents. He believed that we should obey them when we are young, care for them when they are old, mourn at length when they die and make sacrifices in their memory thereafter. ‘In serving his parents, a son may remonstrate with them, but gently’, he said. ‘When he sees that they do not incline to follow his advice, he shows an increased degree of reverence, but does not abandon his purpose; and should they punish him, he does not allow himself to murmur’. He even said that we should not travel far away while our parents are alive and should cover for their crimes. This attitude is known as filial piety (‘xiào’). 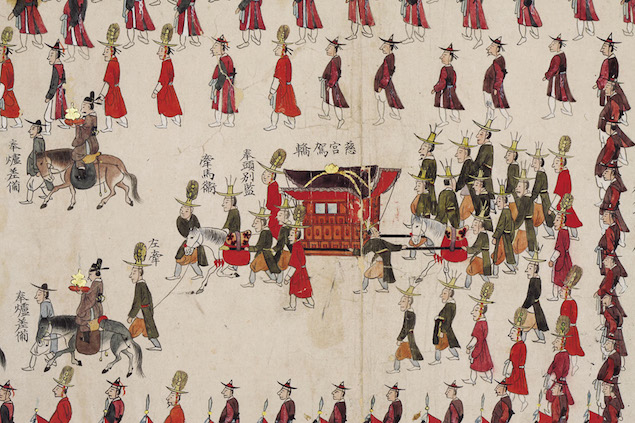 This sounds strange in the modern age, when many of us leave our parents’ homes as teenagers and rarely return to visit. We may even see them as strangers, arbitrarily thrust upon us by fate. After all, our parents are so out of touch, so pitifully human in their shortcomings, so difficult, so judgmental—and they have such bad taste in music! Yet Confucius recognised that in many ways moral life begins in the family. We cannot truly be caring, wise, grateful and conscientious unless we remember Mum’s birthday and meet Dad for lunch.

We should be obedient to honourable people

Modern society is very egalitarian. We believe that we’re born equal, each uniquely special, and should ultimately be able to say and do what we like. We reject many rigid, hierarchical roles. Yet Confucius told his followers, ‘Let the ruler be a ruler, the subject a subject, a father a father, and a son a son’.

This might sound jarring, but it is in fact important to realise that there are people worth our deep veneration, even our simple and humble obedience. We need to be modest enough to recognise the people whose experience or accomplishments outweigh our own. We also should practice peaceably doing what these people need, ask, or command. Confucius explained, ‘The relation between superiors and inferiors is like that between the wind and the grass. The grass must bend, when the wind blows across it.’ Bending gracefully is, in fact, not a sign of weakness but a gesture of humility and respect. 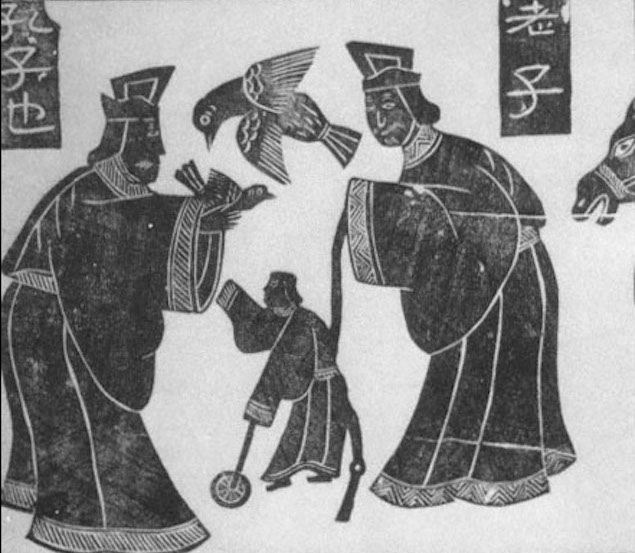 A second-century A.D. depiction of Confucius showing respect to the his elder, Lao Tzu

Cultivated knowledge can be more important than creativity

Modern culture places a lot of emphasis on creativity – unique insights that come to us suddenly. But Confucius was adamant about the importance of the universal wisdom that comes from years of hard work and reflection. He listed the aforementioned compassion (‘ren’) and ritual propriety (‘li’) among three other virtues: justice (‘yi’), knowledge (‘zhi’) and integrity (‘xin’). These were known as the ‘Five Constant Virtues’. While Confucius believed that people were inherently good, he also saw that virtues like these must be constantly cultivated just like plants in a garden. He told his followers, ‘At fifteen, I had my mind bent on learning. At thirty, I stood firm. At forty, I had no doubts. At fifty, I knew the decrees of Heaven. At sixty, my ear was an obedient organ for the reception of truth. At seventy, I could follow what my heart desired, without transgressing what was right.’ He spoke about moral character and wisdom as the work of a lifetime. (We can see now why he had such reverence for his elders!) 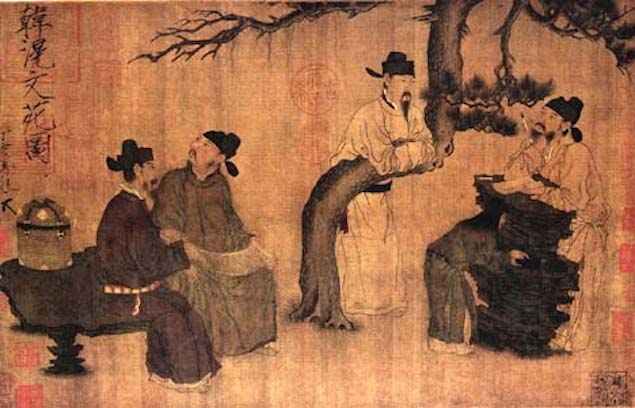 Scholars in a garden–a painting from between the 7th and 10th century A.D.

Of course, a burst of inspiration may well be what we need to start our business or redo our rough draft or even reinvent our life. But if we’re being very honest with ourselves, we’ll have to admit that we also need to devote more energy to slowly changing our habits. This, more than anything else, is what prevents us from becoming truly intelligent, accomplished, and wise.

After travelling for many years, Confucius returned to his homeland at the age of 68 and devoted himself to teaching. He is said to have died in 479 B.C. at the age of 72–an auspicious and magical number. He died without reforming the duke and his officials. But after his death, his followers created schools and temples in his honour across East Asia, passing his teachings along for over 2,000 years. (They also kept his genealogy, and more than two million people alive today claim to be his direct descendants!) At first, Confucian scholars were persecuted in some areas during the Qin dynasty (3rd century B.C). But in the later Han dynasty (3rd century B.C. to 3rd century A.D.), Confucianism was made the official philosophy of the Chinese government and remained central to its bureaucracy for nearly two thousand years. For a time, his teachings were followed in conjunction with those of Lao Tzu and the Buddha, so that Daoism, Confucianism, and Buddhism were held as fully compatible spiritual practices. Perhaps most importantly, Confucius’s thought has been a huge influence on eastern political ideas about morality, obedience, and good leadership.

Today millions of people still follow Confucius’s teachings as a spiritual or religious discipline, and even observe Confucian rituals in temples and at home. He is called by many superlatives, including ‘Laudably Declarable Lord Ni’, ‘Extremely Sage Departed Teacher’, and ‘Model Teacher for Ten Thousand Ages’. He is still a steadfast spiritual guide. 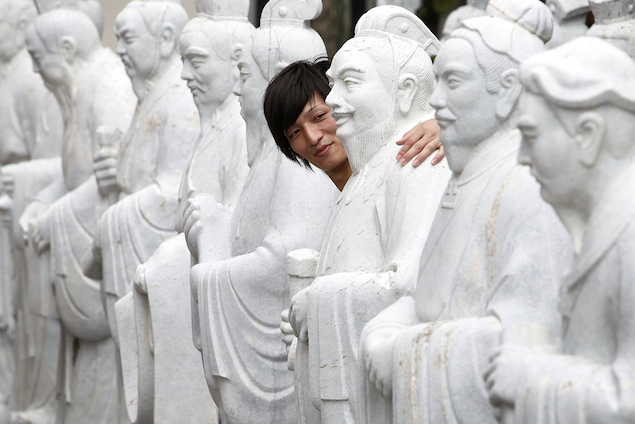 A visitor at a Confucius shrine in Nagasaki, Japan

We might find Confucian virtues a bit strange or old-fashioned, but this is what ultimately makes them all the more important and compelling. We need them as a corrective to our own excesses. The modern world is almost surprisingly un-Confucian – informal, egalitarian, and full of innovation. So we are conversely at risk of becoming impulsive, irreverent, and thoughtless without a little advice from Confucius about good behaviour and sheep.