Eastown Theatre, Detroit - for Perspective - The School Of Life 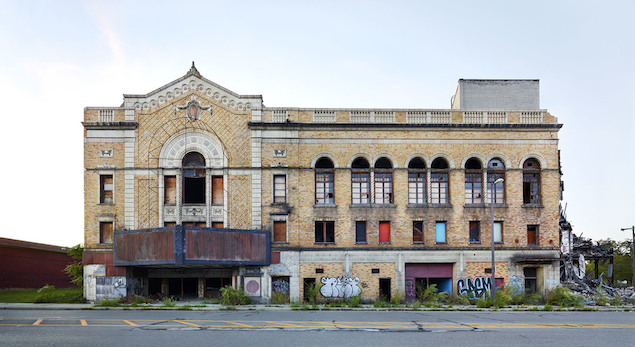 It would be unusual today to find a travel agent recommending a sojourn in Detroit as the ideal vacation. The city is, after all, in decline. There are neighbourhoods full of derelict homes, there are shattered theatres and ruined office buildings that were thriving only a few decades ago.

Yet the idea of going there is far from unreasonable. It has long been fashionable to visit ruins – but only of a very special kind. Announcing you are off on holiday to see what is left of ancient Ephesus, near Izmir on Turkey’s Aegean coast, will raise no eyebrows. We understand that contemplating the beautiful remains of the Library of Celsus can put one in touch with the instability of all human achievement. In its day, the Library at Ephesus must have seemed indestructible. Now we know what can happen to the finest long-term ambitions and the melancholy, bracing truth – hopefully – hits home. We become, in our own lives, more conscious that time is fleeting, that we must not count on the future, that we cannot count on endless good fortune.

But time dulls the power of the message. The idea that a civilisation lasted a mere seven hundred years before collapsing is not – if one is honest – a terribly disturbing thought. The thought that Piccadilly Circus might have only another 537 years to go, or that by 2714, Tate Modern will be buried under sand, does not freeze the soul or force a radical reassessment of life.

That’s why one should head for West Oakman Boulevard or East English Village to contemplate contemporary ruins. Less than ten years ago, these places were filled with hope and life; couples were excitedly choosing paint for the nursery; people were planting trees and upgrading their heating system; they were looking forward to the future.

You should perhaps attend an auction at which a house that would be greatly prized if it was located in Putney or Morningside is sold for a hundred dollars. It has, effectively, no financial value. It has fallen off the edge of the economic universe.

The point of such travel is not to make us downcast. It is, rather, to make us attend to the fragility of life. We do not know what five years will bring. The fascinating classical remains in Turkey elegantly preach a lesson about history. Detroit offers a crash course in short-term error.