Heathrow Airport, London – for Awe - The School Of Life

Next time you’re at Heathrow, worn down by the queues, corridors and bright lights, your spirits may briefly lift at the sight of a discreet island of beauty standing at the end of a pier in Terminal 3. It’s the airport’s control tower, designed by Richard Rogers Partnership, built for £50m, eighty-seven metres tall, the most advanced tower in Europe – and the replacement for a sombre and hideous 1955 tower near Terminal 1, which was decommissioned because it wasn’t tall enough to offer views over the new Terminal 5. 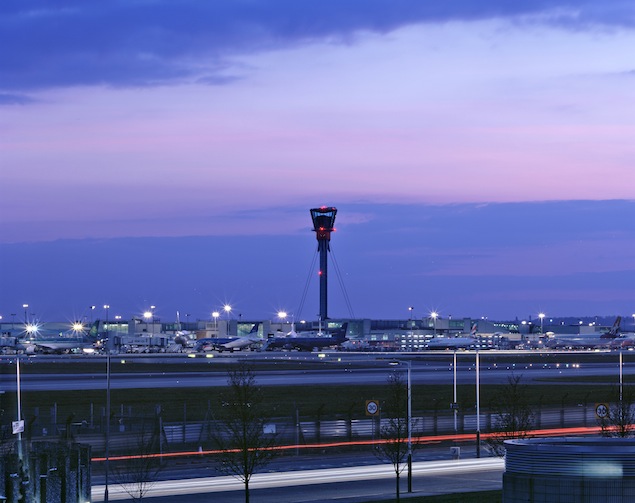 We aren’t very good at celebrating this sort of achievement. An ingrained artistic bias and technological pessimism continues to direct our admiration away from towers filled with banks of steadily breathing computers blinking their ruby red lights. It’s really only terrorists who get the measure of the wonders of our civilisation – however perversely they choose to respond to them by attempting to blow them up.

And yet there is much to be admired in Heathrow’s tower, which looks like a giant eye or brain on a stick, tethered to its spot by massive steel cables bolted to blocks of concrete. Though one might have expected that the vital functions of an airport could by now all be relocated to a subterranean chamber, seeing the whole airfield from a single vantage point with your own eyes remains a surprisingly critical part of operations. 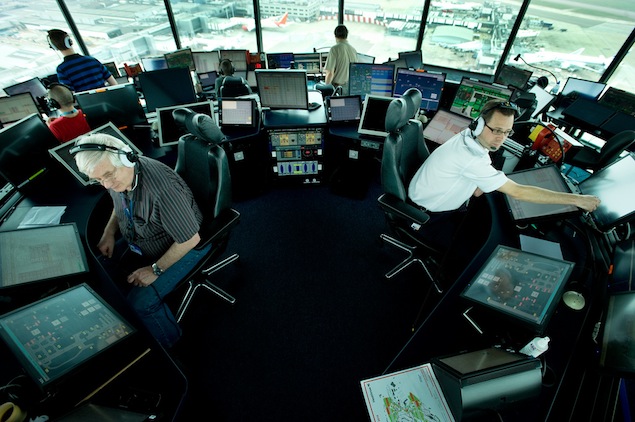 If Heathrow had a monarch, he or she would set up a throne in this tower. Like the London Eye or Parliament Hill, the control tower is inherently pleasing because it grants us command over a landscape that at ground level is at risk of seeming unfathomably complex. From this height, even Heathrow starts to feel manageable, like a board game whose instructions one might pick up after a few rounds. The traumas and humiliations we experience passing through the airport emerge as mere sideshows in a far more noble central drama: the safe ascent and descent of vast aircraft along two implausibly long runways stained tar-black by rubber and oil. We’re reminded that there is more to flying than air miles and lounges, that it is still a sublime and heroic matter to pit oneself against gravity in an aluminium tube.

From here, we can contemplate the airport aesthetically, without the need to remember the armies of harried passengers wheeling their laptops along lino concourses, the covetous atmosphere of the duty free shops or the boredom and jet lag of the seating areas. Though it’s in the centre of one of the busiest airfields in the world, the tower is almost silent, insulated behind panes of 25mm glass, which reduce even the roar of a fully laden Air New Zealand 747-400, taking off to Auckland via Los Angeles, to a murmur. The quiet of the tower resembles nothing so much as the rooftop cocktail bar of an exclusive downtown skyscraper hotel, all leather and whispers, an atmosphere of plush serenity reinforced by the provision of a deep pile carpet and a wash of soft blue light emanating from recessed LEDs in the banisters and handrails.

It takes a professionally very contented person not to entertain at least a brief wish to give up on the ordinary mundane occupations of existence at ground-level in order to join the ranks of these privileged airport midwives, trained to fit their restless or exhausted charges carefully into their berths. Across the airfield, planes are on the move. Wide-bodied jets, from whose windows the whole world can seem like a miniature, now themselves look like an offering from Mattel. 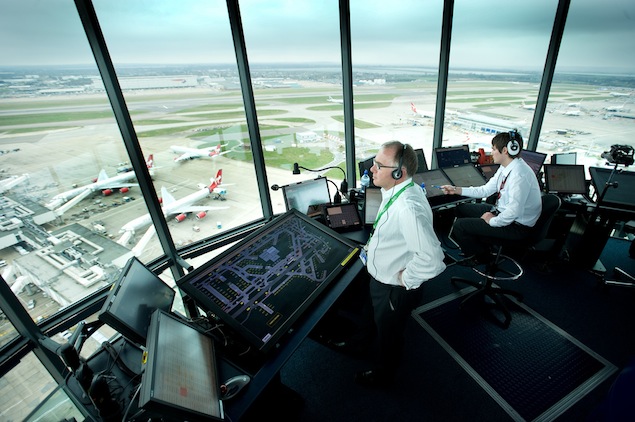 This is an office like no other. There isn’t banter or horseplay here, for there are few jobs so serious that a second of distraction can lead to a thousand deaths. In the olden days, a plane might come in every quarter of an hour. Now it’s a matter of less than a minute between aircrafts. One imagines that the office Christmas party of these sky gazers will be a sober, precise affair (perhaps livened up by the odd paper napkin folded and sent flying over the table by the office wit). The engineers who designed the tower were paid to think the darkest thoughts – and then make sure their building could resist them. There is everything in double or more here – and short of a direct strike from a jet, the tower will endure long after the more delicate terminals which it serves have fallen into ruin. Six cables support the building against cross-winds when three would easily do; there are lifts as well as stairs up the central core and four independent power sources are available to run the equipment. The architecture is in the recognisable, colourful high tech style of the Richard Rogers partnership: the lift panels are yellow, there’s a band of red beneath the control capsule and the cabling and ducts are exposed on the lower floors. Whereas such traits might appear mannered and indulgent in buildings with less stringent technological requirements (city offices or private homes), here one feels that it is the purpose of the tower itself which has necessitated them – and so they have an aura of concentrated seriousness. 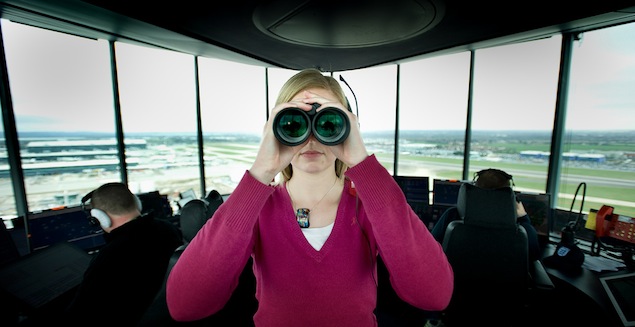 The tower is wilfully undramatic about its achievements. Like so many bits of modern technology, it resists our curiosity. Few members of the public will ever be allowed to visit it. And yet it deserves to be recognised as one of the more awe-inspiring of contemporary achievements, in its own way a work of culture as complete as any artistic creation. So long as all goes well, most travellers through Heathrow will never have to think about the controllers. But when we pass through the airport, we should spare a moment to reflect that our journey was seemingly normal only because of some very abnormal processes and disciplines at work high in that elegant brain on a stick tethered to the ground in a ragged corner of Terminal 3.