On Devotion to Corporations - The School Of Life

On Devotion to Corporations

Karen Lloyd died recently at 51 from cancer. She liked drinking coffee so much her family decided to commission a coffin for her with the name of her favourite chain on the side.

It was a moving, sweetly eccentric gesture. We don’t typically think of corporations as claiming or deserving that kind of place in our lives. Karen’s loyalty, even love, for a brand is extremely unusual. 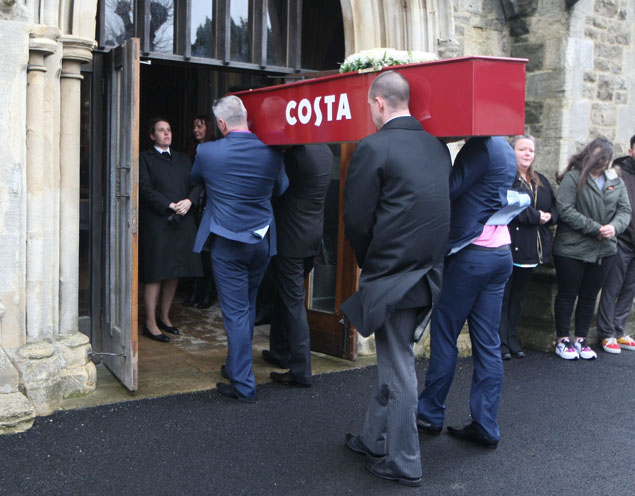 Mostly, we just tolerate the companies who provide the fabric of our lives: phones and shoes, flights, groceries, insurance, trousers, electricity. One might be a bit better than another, offer attractive deals or provide decent service. But this is miles away from deep admiration or love.

We’ve come to think that that’s exactly how things should be. It’s normal to think that if you’re keeping your wits about you, you should be a touch cynical about and detached from the corporate world. Which is why Karen’s funeral has come to wider attention.

Companies sometimes like to talk in terms of love and big missions; but they never quite convince us when they do. It’s easy to satirise their efforts. The slogans are neat (‘We try harder’, ‘Just do it’, ‘I’m lovin’ it…’), but we’re all world-weary enough to shrug our shoulders and walk past with wry disregard.

Right now, most corporations don’t deserve our deep admiration – and they don’t get it either. But at various times, we can catch glimpses of how it could be very different. In 1895, it wouldn’t have been at all strange for a station master to get married in his Great Western Railway uniform. Not because he was slavish. But because the ideals of the transport company resonated so deeply with his own better nature. The company’s devotion to service and reliability, the grandeur of its big stations, the sense of dignity in its pension schemes – these were things someone could take to heart and feel justifiably proud to be part of. 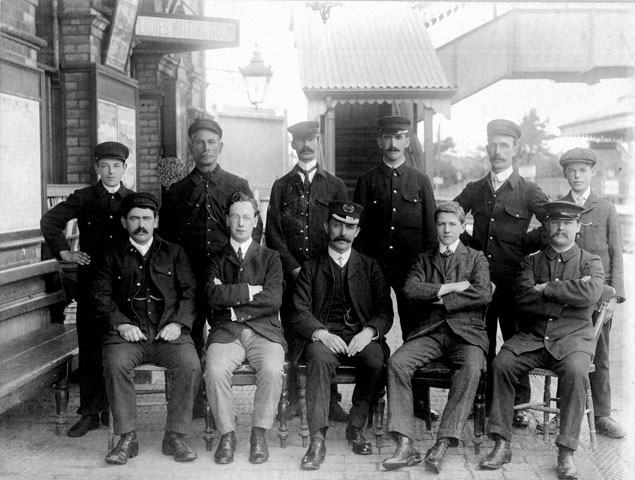 Corporate love: it would not have been strange for employees of the Great Western Railway to make a wedding suit of their uniform

There is a great deal of large-scale ambition in the world, but all the largest corporate entities are focused on servicing basic needs: the mechanics of communication, inexpensive things to eat, energy so we can move about. While our higher needs – for love, beauty, wisdom – have no comparable provision. The drive to grandeur is missing just where we need it most.  There are times when the role of grandeur in economic life is recognisable. The employees of the Great Western Railways did not see themselves as merely having a job, required to switch the points, shovel coal or sell tickets. They understood themselves to be participants in a noble enterprise. The details of their own labour – however minor they might seem – were like the details in a great work of art, necessary contributions to a magnificent whole. It was by doing efficiently and conscientiously what they did that the great collective effects could be produced – that a fast, comfortable train could thunder through tunnels and speed across viaducts; that all the immense complexity of the machines could fire the imagination of the public. The directors of the business realised that transport could be more than just a way of getting from one place to another – one could be as a passenger strangely awestruck and moved by the beauty of the mechanisms. And they deliberately cultivated a proud sense of participation in their employees. This was not a fiction. They were not cynically pretending, so as to dupe their workers into working harder.

Although located in the past, this model is important for the future. It should be much more widely possible to feel proud of the enterprise one works for, to feel that the efforts one makes are in the service of something genuinely good. That is, it should be possible to sense the grandeur of the task. The experience of grandeur does not merely provide a transient feeling of elevation, it helps us internalise an outlook which we need in order to rise to some of the key individual and collective challenges of life. It counteracts our natural preference for the immediate, the piecemeal and muddling through.

Devotion to grandeur can be a crucial element in admirable practical achievement. Take for instance the impressive expansion of the city of Edinburgh over a period of over a hundred years – from the 1760’s to the end of the 19th century. At the start of this Edinburgh was a cramped, decaying, festering town famous for its dirty streets. By the end it was one of the most beautiful and coherent places on the planet.

This transformation was the led by the Town Council. They did not just think in terms of increased housing, wider, more convenient streets, the opportunities for commerce, although all of these concerns were significant. They explicitly set out to construct the finest, most beautiful, city on earth; they really believed they could do this, and such a belief was crucial at every stage. They deliberately considered the greatest achievements of the past: the public architecture Athens was self-consciously invoked as setting the standard. They wanted to be the “Athens of the North’ – that is to take their provincial capital city, with all its defects, and create something that would equal the best that the history of the world had yet shown. This could easily sound presumptuous, vain, narcissistic, impossible – but the elegance and harmony of the squares and crescents they laid out and the beauty of the public buildings they commissioned, actually live up to the high ambition they set themselves.

Although the council took the initiative, they could have achieved little without widespread sympathy, trust, and shared excitement. In order to turn their plans into reality there needed to be many fellow travellers, who would want to buy houses in the new streets, who would honour and admire the councillors for their ambitions and who would keep the process going in the same direction for several generations. Grandeur was a collective, social virtue, not only the special possession of a few isolated leaders.

Living and dying under the banner of Costa is an endearingly quirky thing to do. And yet, perhaps one day in the future, that kind of devotion could be more than quirky. We could actually be proud to do something like this.

What would it take for corporations to be worth a coffin or wedding suit? They’d have to engage our better selves, do proper good in the world and help us to become who we want to be. Given how much of our lives we give to our work, these sound like highly necessary and not unrealistic ambitions.