Mono No Aware - The School Of Life

Mono no aware is a key term in Japanese culture. ‘Mono’ means ‘thing’ or ‘things’; ‘aware’ means ‘feeling’ or sentiment, and the particle ‘no’ indicates something an object possesses. So mono no aware signifies the deep feeling or pathos of things, the powerful emotions that objects can evoke or instil in us. It is often associated with a poignant feeling of transience, a beautiful sadness in the passing of lives and objects, like the glorious colour of autumn leaves as they are about to fall.

Japanese art and literature has been especially concerned with the moods of pathos around mono no aware: falling blossoms, the changes of the moon, the passing of the seasons, the plaintive cries of birds or insects, and the absence of friends or lovers. 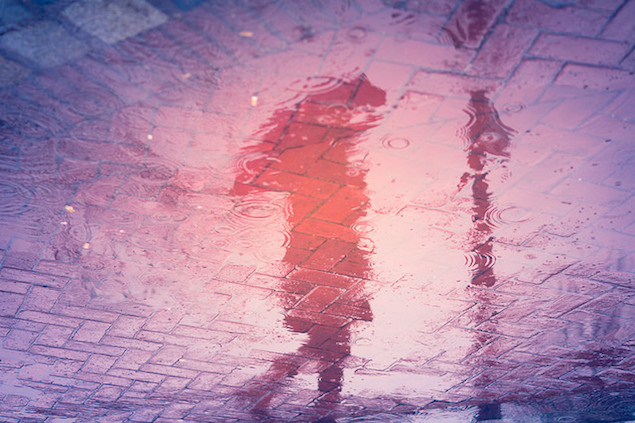 The word ‘aware’ was first used, in the Heian period of Japan (794-1185), as an exclamatory particle to express a spontaneous and inarticulate feeling – as with the particles that we use like ‘ah’ or ‘oh’ or ‘wow’. Mono no aware has hence also been translated as ‘the “ahness” of things’. It is the way in which something affects us immediately and involuntarily, before we are able to put that feeling into words – and Japanese art has often sought to present objects and experiences whose emotional impact is both powerful and obscure to us.

Mono no aware is in deep sympathy with Japanese Buddhism, which stresses the impermanence of life and states that we should willingly and gracefully let go of our attachments to transient things. Zeami Motokiyo (c.1363-c.1443), the major theoretician, actor and writer of the Noh drama wrote that ‘the flower is marvellous because it blooms, and singular because it falls’. 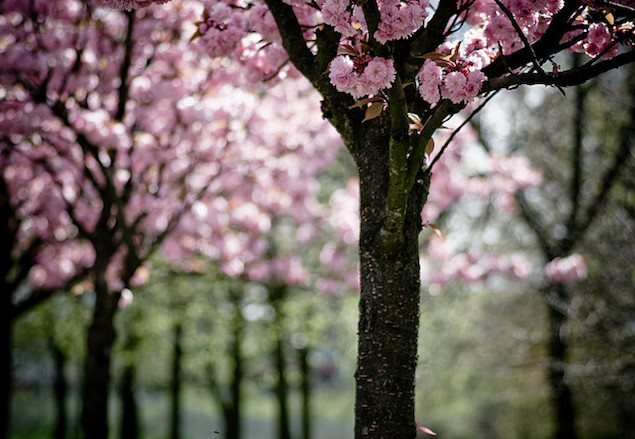 For the eighteenth-century scholar of the Edo period, Motoori Norinaga (1730-1801), mono no aware is more than just a subjective feeling – it is also a form of knowledge. He wrote: ‘To know mono no aware is to discern the power and essence, not just of the moon and the cherry blossoms, but of every single thing existing in this world, and to be stirred by each of them’. While science or abstract philosophy may give us a knowledge of things in their generality, mono no aware is a more immediate and direct knowledge of the distinctive qualities that characterize a unique phenomenon – what cannot be generalised, but can only be felt by the ‘heart-mind’ (the Japanese word kokoro means both the heart and mind) as it experiences something singular. Norinaga claimed that the whole task of literature was to represent mono no aware. The writing of poetry (uta or ‘song’), he suggested, was an act that turned sighing into singing. The breath that sighed in exclamations of wonder, pain or relief – the original meaning of aware as a word – was converted by the poet into articulate patterns of language, images, and sound. Norinage believed that this sharing of feeling between the poet and reader – the way in which we can all be moved, for example, by the sad beauty of falling petals – was the basis of human community itself.

Norinaga hailed the classic Japanese novel of the Heian period, The Tale of Genji by Murasaki Shikibu (c.973-c.1014), often considered the first real novel in world literature, for being particularly saturated in mono no aware. The word ‘aware’ appears over 1000 times in the novel, roughly once on every page. The episode that is most celebrated for its quality of mono no aware in the novel is the parting of two lovers in chapter 10, ‘The Sacred Tree’. Here, the novel’s main character, the prince Genji, travels to a shrine to seek a meeting with the ‘Rokujo lady’ – a former lover of Genji’s who has renounced her love for him on account of his waning feelings. As Genji walks to the temple, the natural setting is richly evocative of mono no aware. It is autumn, the time of year most suffused with ‘aware’ according to a famous Japanese poem of antiquity. ‘The autumn flowers are gone’, we are told, as Genji walks across a stark ‘reed plain’ and listens to melancholy hum of insects and the wind sighing in the pine trees.

The prince seeks to win her back, but she will not be moved from her decision to withdraw from human affairs into temple life, and so the scene of their final encounter becomes filled with an exquisite pathos. Genji stands on the veranda and talks through the blind to his former lover. He passes through a branch from a sacred tree to symbolise his love and they talk until dawn through brief exchanges of poetry. The setting moon epitomizes the melancholy farewell, and Genji exclaims: ‘A dawn farewell is always drenched in dew, but sad is the autumn sky as never before’. The Rokujo lady observes that the song of a cricket is making the ‘autumn farewell’ even sadder. Not wishing to be seen in full daylight, Genji decides to leave: ‘His sleeves were made wet along the way with dew and with tears’. 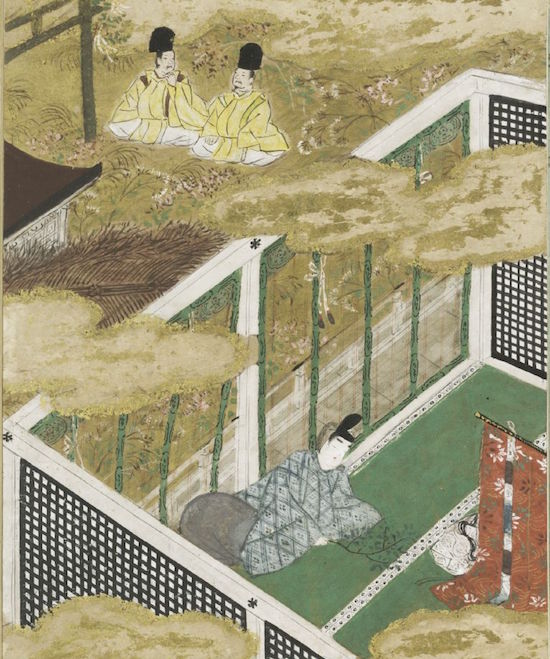 Album leaf illustration, with calligraphic excerpts, of ‘The Sacred Tree’ chapter of The Tale of Genji, by Tosa Mitsunobu (active c. 1469-1522)

Norinaga believed that art like The Tale of Genji can train us to become sensitive to the manifestations of ‘aware’. He believed that Japanese culture needed to go back to the values of sensibility enshrined in the court-based society of the Heian period, which in the subsequent samurai-dominated periods, with their prevailing masculine and warrior ethos, had fallen into partial neglect. In the ‘Yugiri’ (Evening Mist) chapter of The Tale of Genji, Murasaki had complained about the constricted life that women were forced to lead even in Heian society, in which they were denied self-expression: ‘How can we enjoy prosperity in life or dispel the tedium of the ephemeral world when we must hide within ourselves our understanding of things that are deeply moving (mono no aware)?’ Murasaki was a lady-in-waiting at the imperial court. Literature was the one way in which lettered women like Murasaki and Sei Shonagon, another Heian court lady and author of the famous Pillow Book of her personal observations and reflections (completed in 1002), could give vent to their pent-up feelings. 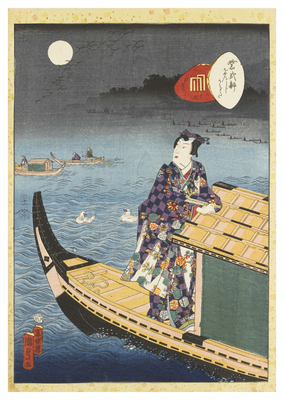 Woodcut illustration of a scene from the Yugiri chapter of The Tale of Genji, by Kunisada II (1857)

Norinaga’s essays on mono no aware also provided copious quotations from the anthologies of early Japanese poetry. He singled out poems that contained the phrase ‘mono no aware’ such as this:

The feelings he has through an autumn night

As he gazes at the moon.

He also selected poems in which the word ‘aware’ was used as a sigh or exclamation:

When the crickets cry.

The later haiku verse of the Edo period, at its height in the seventeenth and eighteenth centuries, continued to express mono no aware in its imagery of the changing seasons, such as the plaintive cry of the short-lived cicadas that is resonant of the end of summer. As Basho wrote:

Haiku poems often convey a sense of the ‘aware’ of things in their focus on the transitory and the fleeting moment.

The most celebrated example of a natural phenomenon rich in mono no aware is the spectacle of cherry blossoms (sakura). A chapter of The Tale of Genji is centred around a Festival of the Cherry Blossom. Norinaga went so far as to claim that ‘the soul of Japan’ is embodied in the sight of cherry blossoms in the morning sun. He went on a pilgrimage to observe the cherry blossoms by Mount Yoshino, whose white flowers are famous for matching the snow on the mountain peak, and requested that a cherry tree be planted on his grave. Cherry blossom is the most revered of all natural phenomena in Japan. To this day, excited crowds of families and young people gather to picnic under the cherry blossoms each spring. The custom is known as hanami or ‘flower viewing’. Cherry blossom is not more beautiful, say, than that of the plum or apple tree. What makes it so cherished is the special quality of mono no aware that is imparted by its brevity – the blossom falls within a week. The delicate beauty of its white and pink flowers, so fragile that they are easily carried away by the mildest breeze, is given a heightened poignancy by this transience. 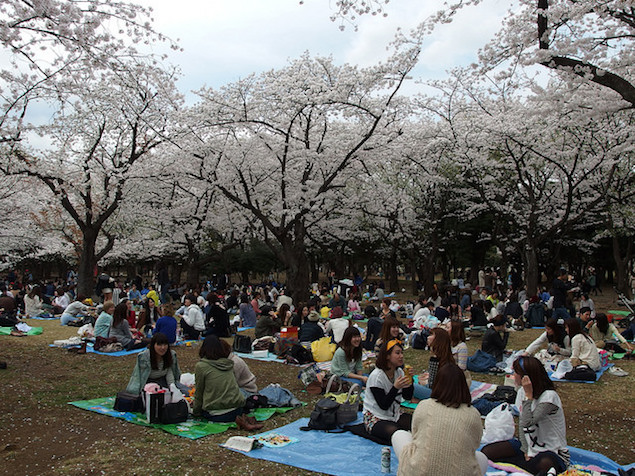 Japanese painting has often depicted cherry blossom, seasonal images, and the sights associated with mono no aware. The famous Genji Monogatari Emaki (Tale of Genji Scroll) of the twelfth century, an illustrated handscroll of the novel, began a tradition of painting evocative scenes from Murasaki’s masterpiece alongside calligraphic renderings of the text. Often these exquisite picture scrolls, painted in colour, look down upon Genji (or his son in the latter part of the novel) at an emotional moment with one of his lovers. They are viewed from an elevated ‘bird’s-eye’ view, with the roof and ceiling omitted.

Scene from the ‘Oak Tree’ chapter of Genji, from a handscroll circa 1130, at the Tokugawa Museum, Japan

The Rimpa school of artists from the sixteenth to the nineteenth centuries, which painted on screens, fans, scrolls, ceramics and textiles, often focused on the transitory phenomena of mono no aware such as blossom or birds in flight against a background of gold leaf. The most influential painting of this school is a remarkably delicate and fine depiction of the blossom of ‘Red and White Plum Trees’ (rather than the cherry) by Ogata Korin (1558-1716). The trees in bloom are set against a stream depicted in abstract and oily spirals, which convey a strong sense of movement and heighten the sense or ‘aware’ of passing time. 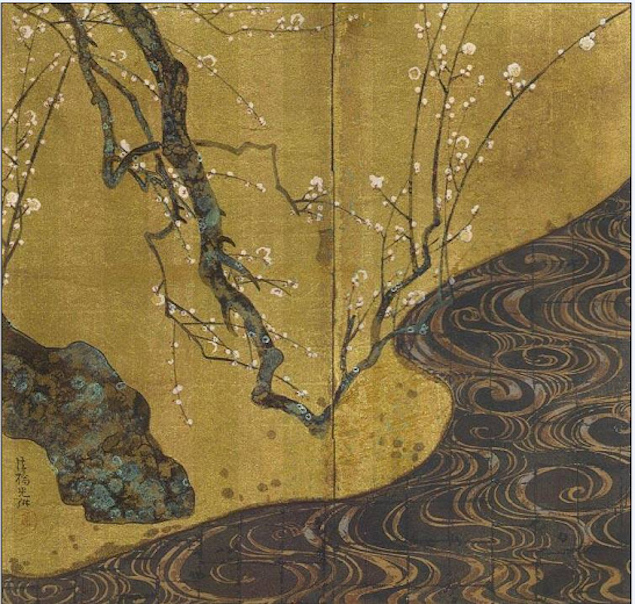 Portion of ‘Red and White Plum Trees’ (Kohakubai-zu), circa 1714, by Ogata Korin

The mono no aware or pathos of things in art and nature can not only train us to become more sensitive to beauty, as Norinaga suggested. It can help us to reach more of an acceptance of the mortality and transience that make life seem so painful at times. As the Buddhist priest, Yoshida Kenko (c.1283-c.1350), observed in his classic Essays on Idleness: ‘If man were never to fade away like the dews of Adashino, never to vanish like the smoke over Toribeyama, how things would lose their power to move us!’. The great source of sadness, the perishable nature of things, is also what gives them such a singular beauty and moving power. And Norinaga believed that art and writing can be therapeutic in their channelling of ‘aware’. Our deepest emotions seek an outlet and expression – and art helps to prevent such feelings from overwhelming us. It gives to mono no aware what Norinaga called the ‘pattern’ of art, such as the rhythm of a verse and its play of rhyme and imagery. The greatest relief, for Norinaga, comes when someone else appreciates our art and shares in its feeling. In this small moment of collective ‘aware’ is the potential for a more profound sense of community.