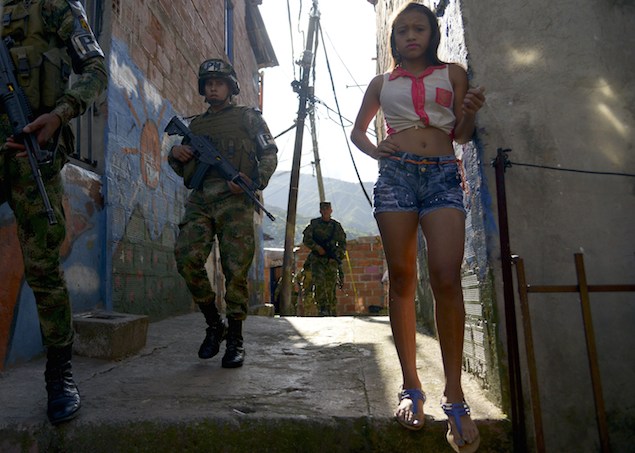 Groups of young men armed with planks of wood roam the alleyways extorting money. Houses are made of bits of tin, old doors, the occasional lump of concrete, oil drums and tarpaulin sheets. Sofa carcasses thrown onto rubbish tips in the first world are covered in strips of office carpet. Open sewers, choked with filth, run between houses. People spend their days picking up refuse in a gigantic dump. This is Comuna 13 in the San Javier district of Medellín (the second-largest city in Colombia): an ideal holiday destination.

In the 18th century, successful young men went on Grand Tours to complete their education.  They travelled to Venice, Florence, Rome and Naples and looked at pictures and statues from the Renaissance and the Ancient World. Their journeys were based on an idea that what their participants most lacked, and might most severely be undermined by lacking, was high culture. They had to undertake such journeys – they needed to know about Titian and Veronese and key moments in Roman history – in order to become fully human.

This distinctive theory has had a huge impact. It explains why, at most times of year, the Uffizi in Florence and the Villa Borghese in Rome are packed. We remain the heirs of the notion that high culture is necessary to complete us.

But there are, in truth, a great many other things we may lack as badly. Most of us are continually disenchanted with our circumstances. It seems impossible not to keep thinking about the people one envies, the ones who made it big. Our countries appear to be intolerably badly managed, dispiriting and coarse. The new supermarkets are unsightly and there’s nothing uplifting on television. There seems so little to be grateful for from day-to-day.

That is why we need, perhaps more urgently than we need to go to Florence, to take a trip to Comuna 13.

Of course we know, in theory, that we’re lucky, all of us in the first world; we’ve known it ever since we were intimidated into finishing what was on our plates by tales of malnourished children in foreign lands. But it’s really only when one spends one’s first night in Comuna 13 that the truth starts to sink in.

There are no street lamps. Girls of 12 are selling themselves on street corners. The police will rob and possibly rape you. Guns go off hourly. If there is a fire, no fire engines can get to the scene; everything is burned. A gash on the leg from a ragged piece of metal or a sliver of broken glass can prove fatal. Your food has shit in it. If you are seriously ill; you die. A luxury would be a biro, some toothpaste, a clean sheet, a door with a lock.

Comuna 13 is an education in appreciation. Like many great art works in elegant galleries, it teaches us to see – and admire –  things we have scarcely noticed before – except it does it with rather more conviction and lasting impact than a work by Vermeer or Jasper Johns.

An 18th-century aristocrat would typically bring home a painting or a statue as a memento of their Grand Tour. They would put it in a prominent place at home: above the fireplace or in the hallway, so that they would see it everyday and so that the lessons of the trip would be kept fresh. Today, on returning from a week’s stay in Comuna 13, one might keep a bit of corrugated iron or a photo of the rain flooding straight through the roof of Eliana and Camilo’s one-room home, soaking them and their three young children to the bone