Boethius and The Consolation of Philosophy - The School Of Life

Boethius and The Consolation of Philosophy

For some 400 years across the European Middle Ages, one philosophy book was prized above any other. Present in every educated person’s library, it was titled in Latin De Consolatione Philosophiae or, as we know it in English today, The Consolation of Philosophy. Editions appeared in all the large European languages, Chaucer translated it into English, as did Sir Thomas More and Elizabeth I – and Dante made it a centerpiece of the intellectual scaffolding of his Divine Comedy.

The book was the work of the Italian statesman, scholar and academic Boethius, who penned it in a few months in appalling circumstances in a prison in Pavia in 523 A.D. Boethius was born into a highly successful and wealthy family in the years after the collapse of the Roman Empire in the West. From an early age, he took an interest in the Classics, and translated much of Plato and Aristotle’s work from Greek into Latin; it is thanks in great measure to his efforts that Classical philosophy made its way into the Middle Ages and from there into the modern world. 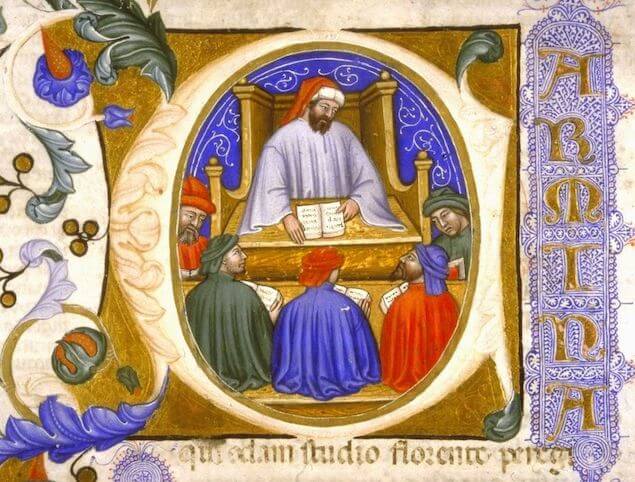 For many years, Boethius’s life was seemingly blessed. He lived in a sumptuous villa in Rome and was married to a kind and beautiful woman called Rusticiana, with whom he had two handsome, clever and affectionate sons. Under a sense of obligation to his society, Boethius eventually entered politics and occupied a number of elevated administrative positions under the ruler of Italy, Theodoric, king of the Ostrogoths. Bertrand Russell wrote of him: He would have been remarkable in any age, in the age in which he lived, he is utterly amazing.

But suddenly, in the spring of 523 A.D, Boethius’s fortune ran out. There was a knock at the door and a gang of Theodoric’s guards accused him (quite falsely) of having plotted against the increasingly paranoid and vengeful king. With scarcely time to say goodbye to his family, Boethius was carted off to prison.

Entirely innocent but also aware of the risk he was in, Boethius fell into despair. In a tiny cell, he contemplated his rapid fall from grace, his love for his family and the unfairness of his destiny. What would eventually lift his spirits – and at the same time, gift humanity one of its greatest works of prison literature of any time or place – was his decision to think his way philosophically out of his sorrows.

As The Consolation of Philosophy opens, Boethius describes his listless sadness and terror at his state: ‘White hairs are scattered untimely on my head, and the skin hangs loosely from my worn-out limbs’. But in this downcast state, Boethius receives an unexpected visit: ‘While I was pondering thus in silence, and using my pen to set down so tearful a complaint, there appeared standing over my head a woman’s form, whose countenance was full of majesty, whose eyes shone as with fire and whose power of insight surpassed that of all men…’ 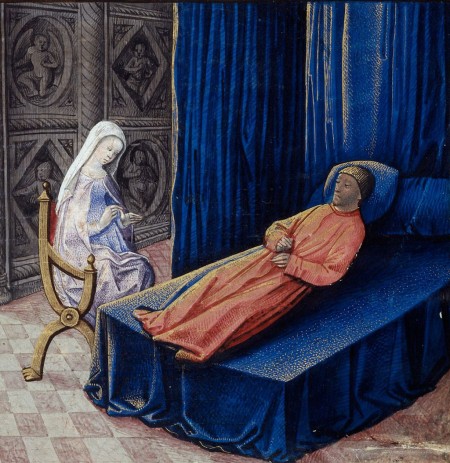 His visitor is a metaphorical figure whom Boethius terms Lady Philosophy. Lady Philosophy is carrying a pile of classical books in one hand and a sceptre in the other – and she has come to visit Boethius in his cell in order to remind him of some of the fundamental truths of his favourite subject, largely as defined by the Stoic school of Greece and Rome. That she should have dropped in on him was, in a sense, no surprise: in the classical world, philosophy was not an abstract academic discipline, it was a set of tools specifically designed to help one live and die well, and with acute relevance at the darkest moments.

Lady Philosophy begins by gently chiding Boethius for ‘flaring up against’ his fate. She reminds him, as Stoic philosophers had constantly stressed, that human beings are not in control of most of what happens to them. Our destiny is in large measure in the hands of a devilishly powerful seductive goddess whom the Romans knew as Fortuna, the Goddess of Fortune. This figure was a central deity in the Roman pantheon and was represented across the Roman world on coins and statues. She was typically depicted holding a cornucopia in one hand, overflowing with fruit and luxuries, and on the other, leaning on a tiller, a marker of her capacity to direct people’s fates. Depending on her mood, Fortune might either shower us with gifts or, with a blithe smile, steer us towards catastrophe.

To be a philosopher means to understand all that Fortune controls, to resist her blandishments, to know never to put complete faith in the things that are, ultimately, always in the hands of an immoral and reckless force – and to prepare for the day when we may have to surrender her gifts at a stroke. These gifts comprise most of what we would today think of as the fundamental ingredients of happiness: love, family, children, prosperity, reputation and career. But, for a Stoic philosopher, none of them should be things that the wise should ever really trust – for all of them can be lost in horrific circumstances at any moment.

Lady Philosophy sits with Boethius in his cell and reminds him of his appalling exposure to Fortune’s deceptive charm: ‘I know the many disguises of that monster, Fortune, and the extent to which she seduces with friendship the very people she is striving to cheat, until she overwhelms them with unbearable grief at the suddenness of her desertion.’

But Lady Philosophy also reminds Boethius that the wise have to resist putting their faith in the gifts of Fortune. She introduces a famous image of a Wheel of Fortune, which spins between success and favour – and appalling punishment and pain. Fortune spins the wheel with abandon and merciless cruelty, enjoying the screams of those who, only hours before, were confident of their future.

‘If you are trying to stop her wheel from turning, you of all men are the most obtuse,’ Lady Philosophy tells Boethius, ‘You are seeking to regain what really did not belong to you.’

Fortune herself pipes up at this point and says with chilling candour: ‘Inconstancy is my very essence; it is the game I never cease to play as I turn my wheel in its ever changing circle… yes, rise up on my wheel if you like, but don’t count it an injury when by the same token you begin to fall, as the rules of the game will require…. Isn’t this what tragedy commemorates with its tears and tumult?’ 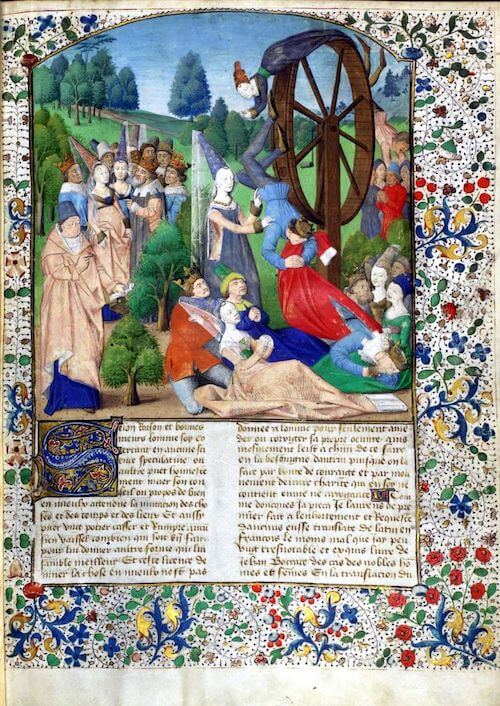 Lady Philosophy now gets to the heart of her message. Boethius must, like any good philosophically inclined person, stop trusting in anything that Fortune can take away at once: ‘You know there is no constancy in human affairs, when a single swift hour can often bring a man to nothing.’

‘If you are in possession of yourself you will possess something you would never wish to lose and something Fortune could never take away…. Happiness cannot consist in things governed by chance.’

Boethius must retreat to what the Stoic philosophers called his ‘inner citadel,’ a minimal self immune from the cruelty of Fortune. Lady Philosophy stresses that a different sort of happiness can be found by focusing on all that Fortune can never make one lose, specifically one’s powers of reasoning, which give one access to the beauty, mystery and complexity of the universe. True philosophers rise above their immediate circumstances, become indifferent to their own fate and identify with the vast forces of history and nature.

It’s a measure of the relevance of Boethius’s message that we today so firmly identify happiness with two areas that lie entirely in the hands of Fortune: romantic love and career success. And, unsurprisingly, we are continually let down here too, the wheel of fortune spinning us randomly from promise to disgrace, from hope to ruin. Boethius’s provocative message to his own times and to our own is that the best way to find peace of mind may be to perceive the ingredients we associate with happiness as in truth direct conduits to a fundamental instability, and thereby to inner torment and anxiety.

Boethius’s wisdom was to be the last eloquent outcry of the guiding ideas of Classical philosophy and in particular, its Stoic branch. Thereafter, Christianity subsumed its insights, which were then further obscured by the scientific optimism of the modern period. 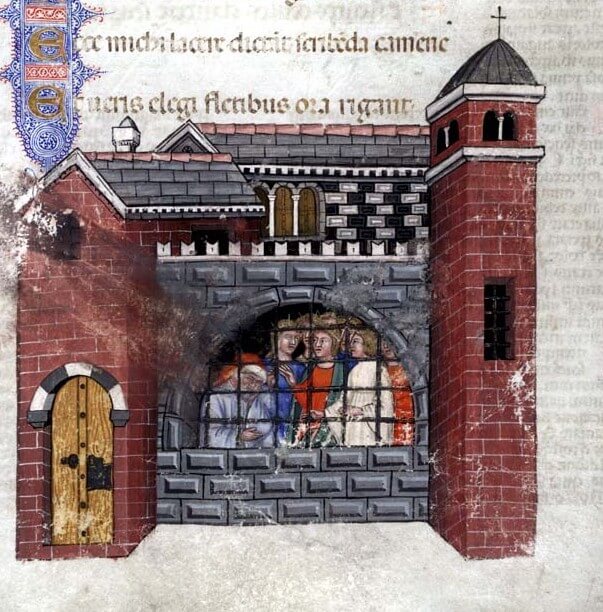 Our own troubled times deserve to witness the rediscovery of the Stoic message. We become philosophers not by writing books or attending university courses, but by appreciating how little of our lives is in our hands, the ubiquity and fickleness of Fortune and our need to look beyond public opinion, family, love and status – in order to build up serenity through the exercise of one’s distinctive and fate-independent mental powers.

Boethius was killed, as he feared, a few months after being imprisoned. His grave lies in the Church of San Pietro in Ciel d’Oro in Pavia, half an hour from Milan. In his honour, we should leave space for Lady Philosophy occasionally to come and visit us – and, when we are facing the worst turns of Fortune’s wheel, let her strengthen our resolve to depend a little less on what was in fact never really ours to rely upon.