A Philosophical Exercise for Envy - The School Of Life

Typically, envious feelings swirl around unexamined. We carry them about guiltily but blindly. This gives rise to outbursts of bad temper directed at innocent bystanders (especially one’s partner); the sneaking hope that something bad is going to befall the person we envy and a sullen sense that one’s life is second-rate. But rather than repress the experience of envy, we should undertake a Philosophical Exercise to a) focus it and b) lend it perspective. 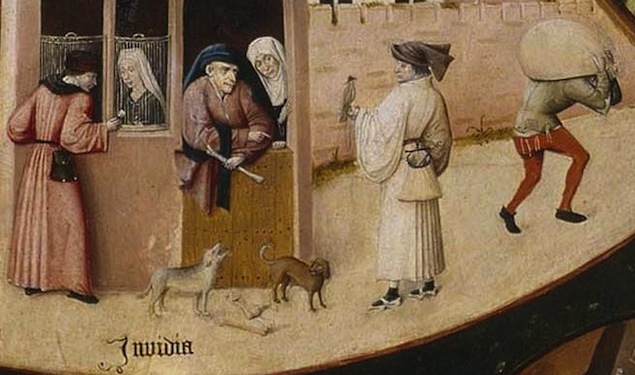 The exercise below needs about 10 minutes to carry out. The questions and tasks are prompts. They’re not all going to be relevant. They won’t cure envy in one swoop. But they seek to reduce its trauma and start us on the path of dealing better with a powerful and difficult feature of life.

It’s so unpleasant to admit to envy, we rarely do it head on, even to ourselves. Therefore, under the heading I admit I am envious of  …, make a list of the people who have recently triggered the emotion.

Guy who had that phone business

Woman who lives in that house in Well Walk

Gina (at the tennis club)

The blunt declaration can be deeply freeing in itself. It is an admission, counter to neo-Christian moralism, that one is daily riven by envy and that this is profoundly normal, and even a sign of health.

For each person, write down the obvious immediate reason why their life seems to be terrific:

Simon: read about him in the newspaper this weekend.

G.A: seems to have some big job in TV.

Guy who had that phone business: has 250 shops around the world.

At first, it can seem as if we want to be exactly like the person we envy. We want to have their life, pure and simple. And yet our circumstances, aptitudes and needs are likely to be extremely different from their own, even though we do still need to learn something from them.

Try to identify one or more reasons why it would be odd, impossible or even quite undesirable for you actually to be the person you envy:

Simon: I am not an actor and would hate to be.

Guy who had that phone business: I have no interest in communications businesses.

But your envy isn’t crazy. There is something real that you are latching on to, it’s just a question of pinning it down a little more accurately.

So now look again at the names on your list, and try to find a small but significant thing that it is genuinely realistic to admire and to want to learn from:

Simon: he has managed to be popular and cheerful.

G.A.: she seems decisive and unburdened by anxiety.

Guy who had that phone business: the idea of being creative for oneself.

You should now have converted a PERSON into a set of ADJECTIVES:

Guy who had that phone business: creative, independent

Step Three: Picturing your future Self

Ask yourself what you would need to do to infuse your present life with the qualities you have identified.

Complete the following sentence with all the people on your list:

From [person X] I envy, I could realistically learn…

Resist the impulse to denigrate those you envy. Settle into the position of a student of your own envy.

It feels like you are deeply equal to the people you envy. But in what way are you not in fact their equal? What genuine qualities do they have which you lack?

Fill in the following sentence:

But I am not equal to X because…

– Every life is incomplete: what do you think the people you envy might envy?

– What do you think are the statistical chances of accomplishing what the person you envy has accomplished? How common is this?

– In what way is it reasonable enough that you might not have got this thing, given how things are…

– Imagine someone who likes you describing how you are OK, even quite admirable, without the thing they envy

– Name as many things as you can that you craved in the past and then acquired, but which failed to improve your life as much as you had anticipated.

– Contemplate one of these images of planets far from our own: