On the Role of Art in News - The School Of Life

On the Role of Art in News

Yuan Zhouming makes a meagre living polishing people’s shoes twelve hours a day on the streets of Wenzhou, a large city in south-east China. His wife ran off a few years ago, so he takes his four-year-old son around with him while he’s working. The little boy used to beg for food, dart into the road, and sometimes try to steal things from passers by. So the father has taken to tethering him with a rope to keep him out of mischief. He lives his childhood on a tiny patch of pavement. It’s not cruelty, it’s desperation. The father just can’t do his job and keep an eye on Yuan Wang at the same time. At night, they go home to a single squalid basement room. The boy has a teddy bear – his one comfort.

Theoretically, we know quite well that there is something called poverty in China. And we realise that many children in all countries have hard lives. But if we’re honest we have to admit that mostly we’re not moved by these abstract facts. We don’t really take it in.

News is always running into this difficulty. Unemployment in Greece is 28%. The average wage in China is $7,890 US per annum. There were 300,000 car thefts in France last year. 28% of boys in the UK aged between 8 and 16 say they enjoy reading – compared with 62% of girls. The prestige of data is fed by the tempting but false idea that ‘knowing the facts’ is what matters. Abstract statistics look clever and serious. But so often they just wash over us.

The chained boy and his shoe-shine father take us in the opposite direction. We are creatures designed for intimate contact, for local lives and personal relationships. For ideas to become powerful in our souls, they need to be anchored in experience. We need to feel them, see them. This is what art, at its best, lasers in on.

In 1816, French newspapers reported that a naval frigate, the Méduse, had run aground off the coast of Africa, with the loss of 133 lives. Only a few survivors made it, clinging desperately to a raft for many days. It could have just become one more tiny forgettable item in the vast catalogue of maritime disasters. But the great French painter, Gericault, made it live in the imagination of humanity for ever.

In just the same way, thanks to the art of documentary photography, the story of Yuan Wang and his father has the chance to become more than a dull statistic. 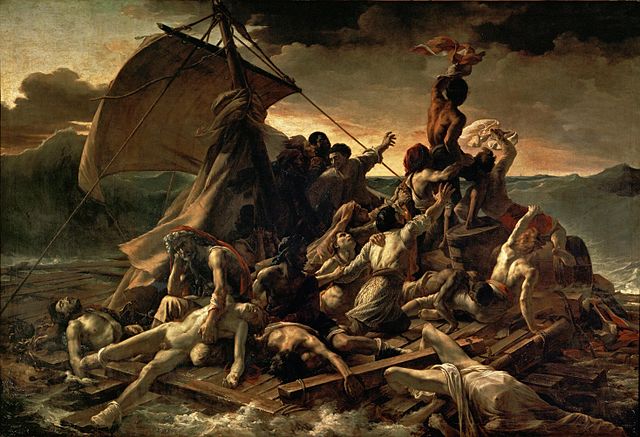 You would have been unlikely to think of the story for more than a second – until it became a work of art.

News organisations are overwhelmingly focused on gathering information – assuming that if the information is significant, it will go deep into our hearts and minds. But in truth, facts are rarely enough. We merely get bored and turn away when they’re heaped in front of us. In order to matter to us, news has to become skilled at entering our imaginations: it has to accept the resounding truth that bare information isn’t sufficient. To do justice to the material it handles every day, news needs to become a little more like art.