How ‘Transference’ Makes You Hard to Live With

You’re flicking through a fashion magazine and playfully suggest that your partner might want to make a few experiments with their wardrobe. How about a different pair of jeans or a new T-shirt, a duffle coat or platform heels? But at the mention of this possibility, your partner gets very agitated indeed: they scornfully declare that money is tight, they haven’t got any time, they have too many clothes already and why are you deliberately annoying them by making vapid proposals like this?

This response is very off-putting. You only made a perfectly reasonable suggestion and now they are declaring war. You didn’t do anything. Their behaviour seems utterly out of proportion with what triggered it. You may conclude, as you have done on other occasions, that in some areas the person you love really does seem ‘a bit mad.’ This conclusion, though perhaps depressing, also feels strangely satisfying. At least you know what is up.

But we are all a ‘bit mad’ in ways that preclude such dismissive statements and demand closer and more generous examination. For all of us, there are situations and behaviours which can be counted upon to elicit swift and powerful responses which don’t seem in any way in line with what is happening right now. Our behaviour seems not to fit what is unfolding in front of us. For example, someone we love is going away for a month, and tells us they will miss us very much indeed. They move to hug us. But far from feeling sad and tender, we just register numbness, pull away and can’t say anything other than that the weather is unseasonably chilly today. Or we return home to find there is a bit of a mess in the kitchen, but rather than taking this in our stride, we start to shout at our partner that the house is chaos and life with them has become impossible. Or a friend is only ten minutes late for our birthday party, but we are compelled to send them a text calling them an idiot and asking them not even to bother coming.

These sort of behaviours don’t make any sense if we try to justify them simply according to the facts in the here and now (as we and their perpetrators are inclined to do). The clue to them lies in something known as transference – a psychological phenomenon whereby a situation in the present elicits from us a response – generally extreme, intense or rigid in nature – that we cobbled together in childhood to meet a threat that we were at that time too vulnerable, immature and inexperienced to cope with properly. We are drawing upon an old defence mechanism to respond to what feels like a very familiar threat.

In most of our pasts, when our powers of comprehension and control were not yet properly developed, we faced difficulties so great that our capacities for poise and trust suffered grievous damage. In relation to certain issues, we were warped. We grew up preternaturally nervous, suspicious, hostile, sad, closed, furious or touchy – and are at risk of becoming so once again whenever life puts us in a situation that is even distantly evocative of our earlier troubles. Perhaps a parent we loved left us for long periods to work abroad. They didn’t mean to but the pain was so intense at that time, we reacted by shutting down our capacities for affection. Our way of coping was not to feel, to grow numb – a response that we keep producing even now, 30 years later, whenever someone we love has to go away for a time. Or perhaps we had chaotic, unreliable parents whom we dealt with by rigidly organising our room, arranging books by size, and reacting with alarm at the slightest bit of dust – and even now, outer disorder ushers in a panicky feeling within that everything is out of control once again. Or we had a sister who was always late to events that mattered to us, or a mother who was both humiliating and obsessed by fashion.

The unconscious mind is slow to realise that things have changed in the outer world but sadly quick to mistake one person for another, seeming to judge only by crude correspondences; ‘someone we love’ or ‘a person coming to our party’ appears to be enough to confuse us.

Because transference happens without us knowing it, we generally can’t explain why we are behaving as we are. We carry years behind us that have no discernible shape, which we have forgotten about and which we aren’t in a position to talk others through in a manner that would win us sympathy and understanding. We just come across as mean or mad. What we would ideally need is a guardian angel who can pause the present and carry our partners back to another time and place, to the moment when the neurotic defence that we are projecting originated. They’d be able to see the unreliable parents, the chaotic house, the loving but neglectful father, the fashion-obsessed mother etc. – and might be appropriately moved by what we had to cope with before we knew how to.

The concept of transference – and the accompanying idea of projection – provide a vantage point on some of the most frustrating behaviours that we ever meet with in relationships. And they allow us to feel sympathy and understanding where we might have only felt irritation. If we cannot always be entirely sane in our relationships, the kindest thing we can do for those who care about us is to hand over some maps that try to chart and guide one through the more disturbed regions of our internal world.

Key to building up such maps is working out where transference might be occurring. For this, we can rely on ‘transference exercises.’

The most famous of these is the Rorschach test, devised in the 1930s by the psychologist Hermann Rorschach to help people to learn more about the contents of the hard-to-reach parts of their own minds. By being shown an ambiguous image and asked to say what it was, Rorschach believed that we would naturally reveal some of our latent guiding fears, hopes, prejudices and assumptions.

The important point in any Rorschach test is that the image has no one true meaning. Different people merely see different things in it according to what their past predisposes them to imagine. To one individual with a rather kindly and forgiving conscience, the image below could be seen as a sweet mask, with eyes, floppy ears, a covering for the mouth and wide flaps extending from the cheeks. Another, more traumatised by a domineering father, might see it as a powerful figure viewed from below, with splayed feet, thick legs, heavy shoulders and the head bent forward as if poised for attack. 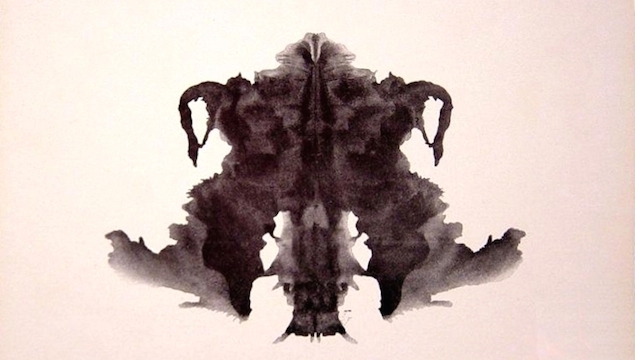 Or take another classic transference exercise: 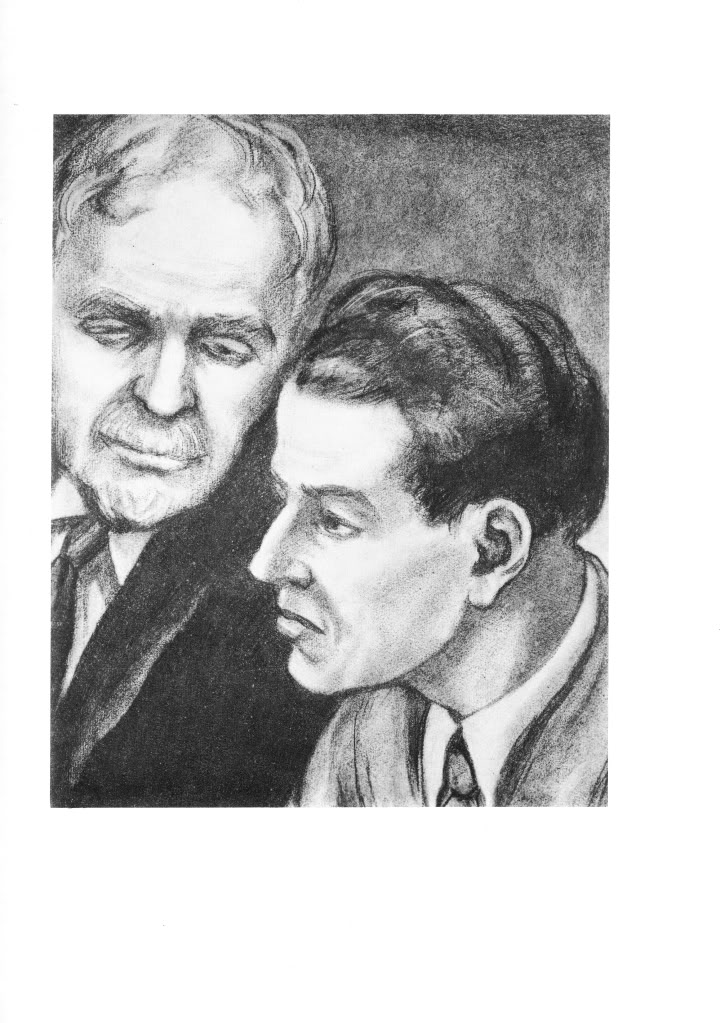 It’s key that this image is rather ambiguous. You can read it many different ways, and that’s the point: to make you aware of your characteristic instances of transference by teasing them out with an inconclusive image.

One thing we do know – really – is that the picture doesn’t show any of these things, it simply shows two men rather formally dressed, one slightly older. The elaboration is coming from the person who looks at it. And the way they elaborate, the kind of story they tell, may say more about them than it does about the image. Especially if they get insistent and very sure that this is what the picture really means. This is what one means by transference.

A third transference exercise asks us to say the first thing that comes to mind when we try to finish certain sentences. For example:

3. When I fall in love, what’s bound to happen is…

4. When someone I care about is late, it must be because…

5. The kitchen is in chaos, and it’s evidence that…

6. When I hear someone described as ‘very intellectual’, I imagine them being…

Because these sentences aren’t about a concrete situation in the present, the only way to answer them is by calling up transferences from the past. Our responses hence give us a clue as to a bias in our minds that would normally be invisibly applied, merging imperceptibly with the dilemmas of the present.

In good relationships, people are ready to accept that they might be involved in transference. Ideally, we should all rationally disentangle and un-distort our transferences and explain them to others in good time. But it rarely happens and collectively we pay a big price for our ignorance. We keep making things tough for everyone by over- and under-reacting – and so our relationships are far harder than they need to be.