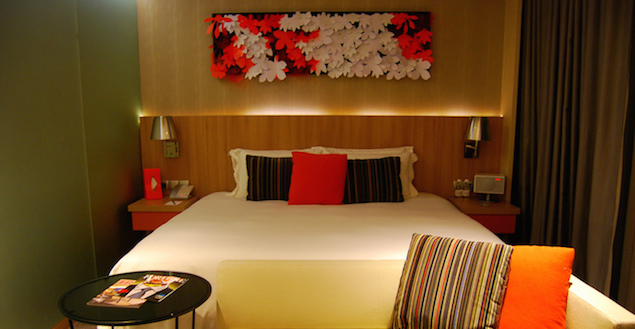 You’ve been in the air for 12 hours. Now this anonymous box. It was your company’s idea. You’d have a chance to sleep a little, then catch the next 11 hour flight, before heading straight into the conference.

You’ve been assigned a room at the top western corner of the building from which you can see one side of a terminal and a sequence of red and white lights that mark the end of a runway. Every minute, despite the best attempts of the glazing contractors, you hear the roar of an ascending jet, as hundreds of passengers, some perhaps holding their partners’ hands, others sanguinely scanning The Economist, head out over the Straits of Singapore.

You’re hungry and hunt out the room service menu. ‘Pacific snapper, enhanced with lemon pepper seasoning atop a chunky mango relish.’ The always dour ‘Chef’s soup of the day’. But perhaps, in the end, there’s never an alternative to the Club Sandwich, which you’ve never eaten anywhere but in places like this.

There is a knock at the door twenty minutes later. It is a strange moment when two adults meet each other, one naked save for a complimentary dressing gown, the other (newly arrived in Singapore from the little village of Ujung Batu in Indonesia and sharing a room with four others near the sports stadium), sporting a black and white uniform, with an apron and name badge. It is difficult to think of the ritual as entirely unremarkable, to say in a casually impatient voice, ‘By the television, please,’ while pretending to rearrange papers – though this capacity can be counted upon to evolve with more frequent attendance at global conferences.

You have dinner with Chloe Cho, formerly with CNBC, now working for Channel NewsAsia in Singapore. She updates you on the regional markets and Samsung’s quarterly forecast. You wonder what Chloe’s outside interests might be.

It’s impossible to get to sleep. The prehistoric part of your mind, trained to listen for and interpret every shriek in the trees, is still doing its work, latching on to the slamming of doors and the flushing of toilets in unknown precincts of the building. The sky is a chemical orange colour.

Being unable to sleep night after night, for weeks on end, is – of course – hell. But in smaller doses, insomnia in a lonely foreign hotel does not need a cure. It’s an asset with some key troubles of the soul. Crucial things you need to think about get a chance to unfold here. During the day, back home, you are dutiful to others, you’re part of a team of thirty. The emails come in by the dozen every ten minutes. Here, for once, in this box at the end of a long corridor, you can return to a bigger duty: to yourself.

The hotel on the edge of the runway is a corrective to the demands of the community, to the inability to think in the normal press of the day. It’s like a monastery in the times of old. You can turn things over. The thoughts of this long night would sound weird to your partner, your friends, your children. These people need you to be a certain way. They cannot tolerate all your possibilities and desires – and for some good reasons. You don’t want to let them down; they have a right to benefit from your predictability. But their expectations choke off important aspects of who you are.

Now, in this endless night by the airport, with the window open and a clearing sky above, it is just you, the universe and an A380 on its final approach from Dubai.

In the rush of the day, there is no time for the higher-order questions: where is my career going? How come there is so little tenderness in my relationship? How could I reconnect with my kids? What do I really want from this brief life?

To be turning over such issues and yet to feel like a mere beginner is worrying, but you go with it nevertheless. You’re taking notes on the hotel pad. You have the protection of the night and of a foreign land where no one knows of you or cares about you in the slightest. You could disappear here and hardly leave a trace.

You are naturally very inclined to want to be normal. Yet thanks to this insomnia, you are granted a crucial encounter with your weirder, truer self. The daytime-office you is a misleading picture of what you’re like. This insomnia is a gift, and this horrid lonely over-priced hotel its precious, unexpected guardian.