Guan Yin - The School Of Life

There’s a small building in the centre of Nanjing, sandwiched between an electronics shop and a scooter garage, painted ox-blood red, with a traditional green tiled roof, in the middle of which stands an almost life-sized carved stone statue of a young woman. She is crossed-legged, looking at us with compassionate, kindly eyes. She seems the sort of person one might approach with a shameful confession or to receive sympathy after a rebuff from the world, when one is feeling defeated and without energy to put up the normal guard and pretences. She has a shawl across her fragile shoulders, a finely-sculpted chain around her neck and a lotus flower in the left hand. It’s early evening and a group of people have gathered around her, of varied ages and backgrounds, construction workers and business people, schoolgirls and bureaucrats. Some are mumbling, others smiling as one might at the sight of an old friend. A few have brought gifts, sticks of incense, sweets and little pancakes wrapped in brightly coloured paper. 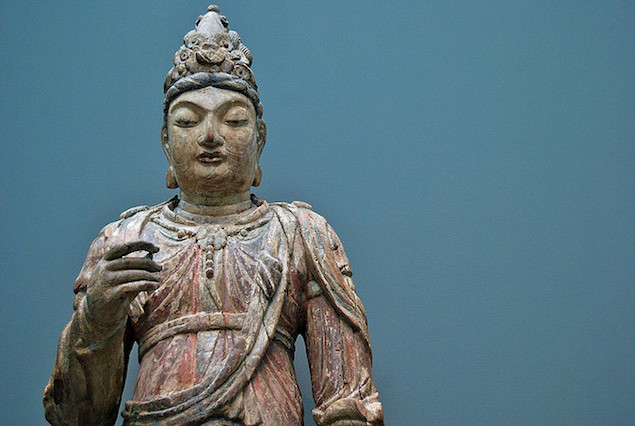 This is Guan Yin, a woman who Buddhist legend tells us was born more than a thousand years ago into a wealthy royal family in southwest China. Like the Buddha, she was at a young age struck by the prevalence of suffering and, in rebellion against the expectations of her parents, ran away from home in order to join a monastery and devote herself to the needy. Her cruel and self-righteous father was furious at what he took to be her ingratitude and ordered her agents to track her down and behead her without mercy. But the princess found shelter among those she helped, changed her identity and was able to carry out good works for many years undisturbed. Then one night, news reached her that her father had fallen gravely ill. She immediately returned to the royal palace, brewed a dose of special medicine and slowly nursed her father back to health. Grateful at her exceptional benevolence and lack of rancour, the king begged for his daughter’s forgiveness and in a gesture of atonement, ordered statues to be made of her and placed across his kingdom. 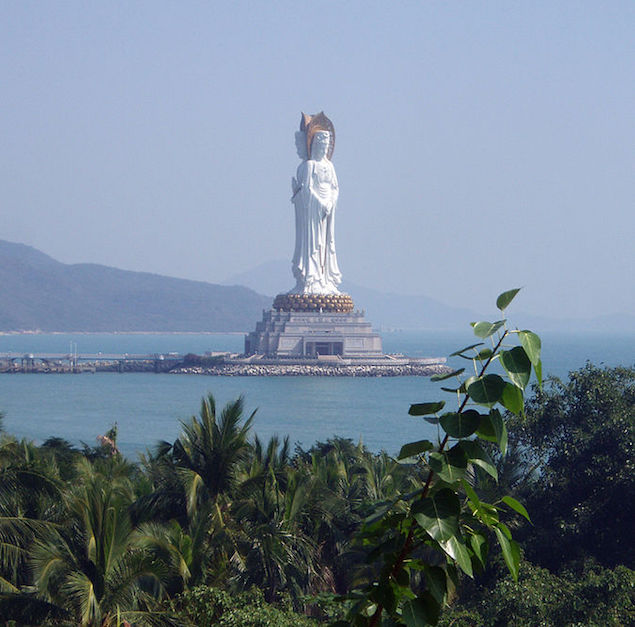 Now Guan Yin is all over China and southeast Asia. She has an alcove dedicated to her besides the Dior store in the international departure area of Beijing airport and a ten metre granite version of her overlooks Hong Kong harbour. She is also available on a more domestic scale, eight centimetre tall Guan Yins for the hallway and, of course, plastic self-adhesive ones for the dashboard.

One goes to Guan Yin for relief from feelings of self-hatred. She is a little like an ideal friend or family member, an imaginary sister or mother. She suggests alternatives to despising oneself. She knows that benevolence towards others has to begin with self-acceptance. Her kindly eyes and smile have a habit of making one cry – for as we know from films, the moment one breaks down isn’t always or even mostly when one is facing overt hostility, rather when, after a period of hardship, one finally encounters kindness and space to admit to the difficulties one has been labouring with in stoic lonely silence for too long. One can be weak with Guan Yin, she isn’t impressed by the normal worldly criteria of success, there is no shame in crying in front of her and admitting the scale of one’s distress. She has the measure of the difficulties involved in trying to lead a halfway decent ordinary life. 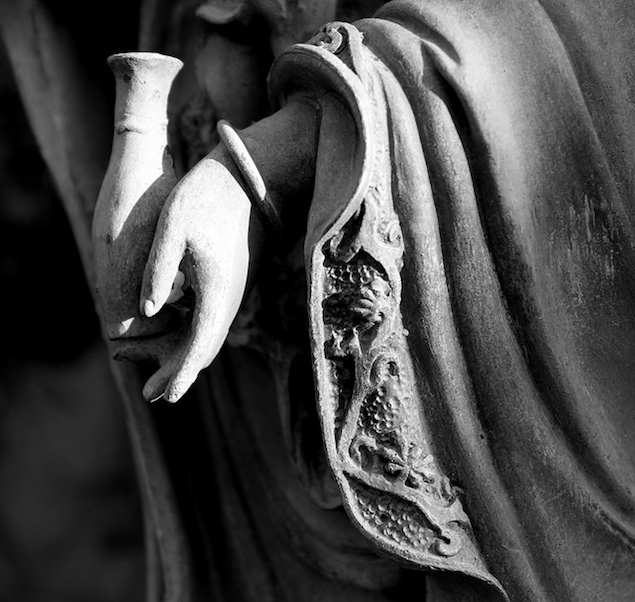 Guan Yin is what Buddhists call a bodhisattva, and what Christians would call a saint. The Mayana branch of Buddhism to which Guan Yin belongs recognises many hundreds of bodhisattvas, usually historical figures, born in a variety of locations across Asia, whose qualities of character have earnt them a divine status. The bodhisattvas are mentioned in books and appear in paintings, but primarily, they feature as sculptures, three dimensional beings ranging in size from small dolls to light-housed sized giants and made in anything from rubber to wood to jade. The figures attract reverential ceremonies, one gives them presents, talks to them, puts them in temples, keeps them clean and celebrates their birthdays (Guan Yin’s is on the 19th day of the second lunar month). 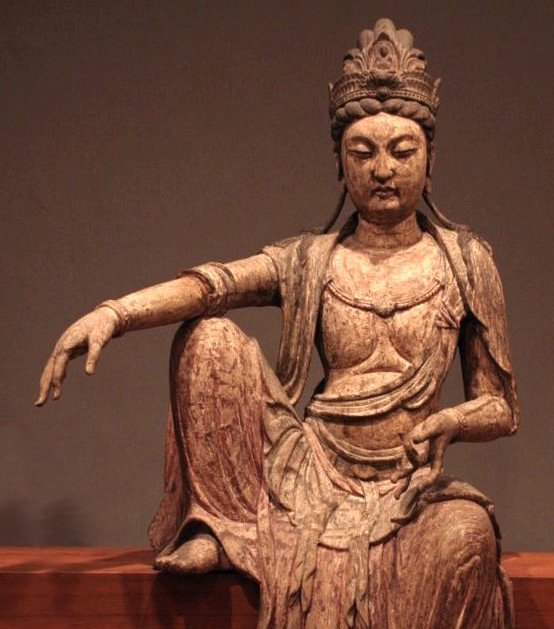 Just as Christian saints will approximate the goodness of Jesus, so the boddhisattvas are said to have a compassion and calm akin to the Buddha himself. And yet, like saints, individual bodhisattvas are revered for their talents in particular areas, there are bodhisattvas who care especially about animals, others who have an affinity for coping with physical pain, others still who understand the challenges of bringing up children.

Guanyin is the Buddhist counterpart to the Virgin Mary and she fulfills a similar role: that of hearing us in our distress, meeting us with tenderness and strengthening us to face the tasks of life. The centrality of these maternal figures in both Buddhism and Christianity suggests that mature adult lives share moments of deep self-doubt – and longings to recover some of the security of childhood. We need to be reassured that these wishes are not a sign that we have failed as human beings.