Le Corbusier - The School Of Life

If the idea of being a ‘modern’ person and leading a ‘modern’ life still has an exciting ring to it, it’s at least in part down to the influence of an extraordinary Swiss architect Le Corbusier, who in the first half of the twentieth century wrote books, put up buildings and designed bits of furniture that conveyed the excitement, sleekness and glamour of the modern technological world.

Le Corbusier began his career by attacking the architecture of the Victorian age – and contrasting it with what he saw as the beauty and intelligence of engineering. ‘Our engineers are healthy and virile, active and useful, balanced and happy in their work,’ he exclaimed in his polemical book, Towards a New Architecture (1923), while ‘our architects are disillusioned and unemployed, boastful or peevish. This is because there will soon be nothing more for them to do. We no longer have the money to erect historical souvenirs. At the same time, everyone needs to wash! Our engineers provide for these things and so they will be our builders.’ 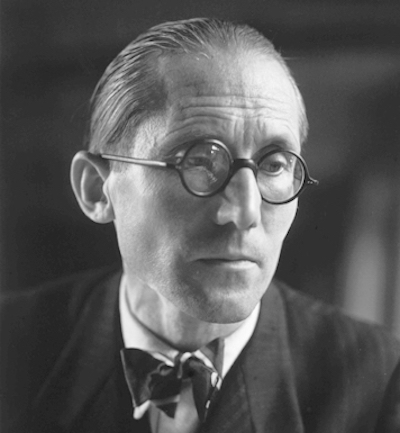 Le Corbusier recommended that the houses of the future be ascetic and clean, disciplined and frugal. His hatred of any kind of decoration extended to a pity for the British Royal Family and the ornate, golden carriage in which they travelled to open Parliament every year. He suggested that they push the carved monstrosity off the cliffs of Dover and instead learn to travel around their realm in a Hispano Suiza 1911 racing car. He even mocked Rome, the traditional destination for the education and edification of young architects, and renamed it the ‘city of horrors’, ‘the damnation of the half-educated’ and ‘the cancer of French architecture’ – on account of its violation of functional principles through an abundance of baroque detailing, wall-painting and statuary.

For Le Corbusier, true, great architecture – meaning, architecture motivated by the quest for efficiency – was more likely to be found in a 40,000-kilowatt electricity turbine or a low-pressure ventilating fan. It was to these machines that his books accorded the reverential photographs which previous architectural writers had reserved for cathedrals and opera houses. 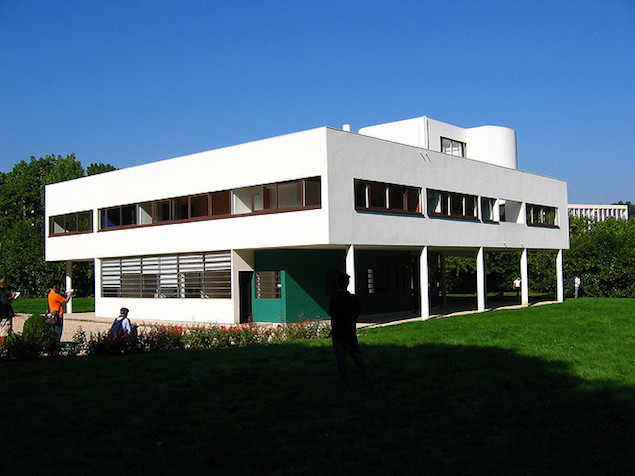 Once asked by a magazine editor to name his favourite chair, Le Corbusier cited the seat of a cockpit, and described the first time he ever saw an aeroplane, in the spring of 1909, in the sky above Paris – it was the aviator the Comte de Lambert taking a turn around the Eiffel Tower – as the most significant moment of his life. He observed that the requirements of flight of necessity rid aeroplanes of all superfluous decoration and so unwittingly transformed them into successful pieces of architecture. To place a classical statue atop a house was as absurd as to add one to a plane, he noted, but at least by crashing in response to this addition, the plane had the advantage of rendering its absurdity starkly manifest. ‘L’avion accuse,’ he concluded.

But if the function of a plane was to fly, what was the function of a house? Le Corbusier arrived (‘scientifically’ he assured his readers) at a simple list of requirements, beyond which all other ambitions were no more than ‘romantic cobwebs’. The function of a house was, he wrote, to provide: ‘1. A shelter against heat, cold, rain, thieves and the inquisitive. 2. A receptacle for light and sun. 3. A certain number of cells appropriated to cooking, work, and personal life’. 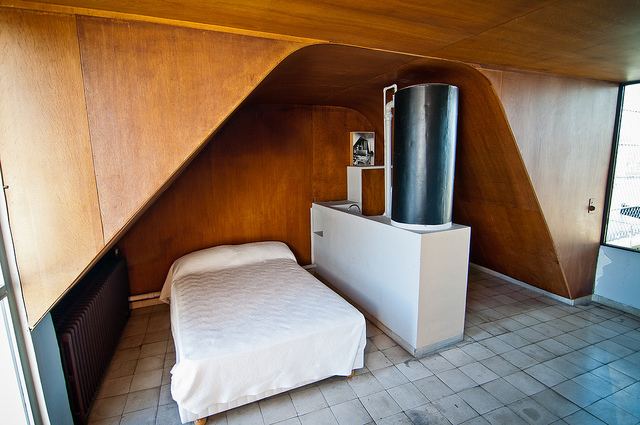 ‘What [modern man] wants is a monk’s cell, well lit and heated, with a corner from which he can look at the stars,’ Le Corbusier had written.

Le Corbusier’s private houses which he built in and around Paris in the 1920s and 30s were unlike anything that people had ever witnessed, both inside and out. Le Corbusier took an interest in their smallest details, always with an eye to increasing efficiency. 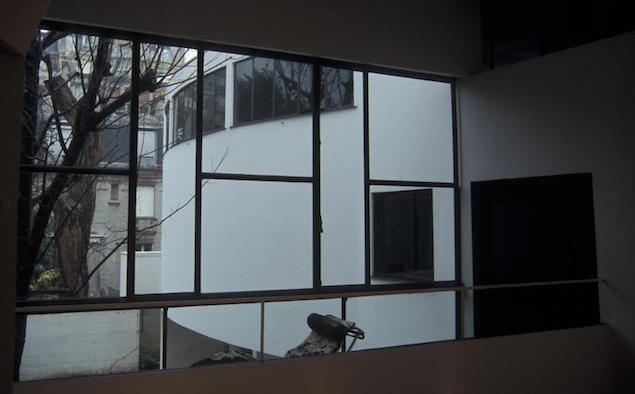 Le Corbusier built much of the furniture himself, and was often to earn more money from it than from his architecture. His inspiration was drawn from the built-in furniture found in the cabins of ocean liners. On a trip back to Europe from Argentina, he made extensive sketches of the cupboards of his own cabin. He marvelled at how many things could be made to fit neatly into a small space, once a designer had taken care to study ergonomics instead of wasting time engraving heraldic motifs. One year, he spent many hours working out how to fit the largest number of pants and socks into the smallest possible space.

Le Corbusier was evidently one of the world’s greatest architects. But he was one of the world’s most disastrous urban designer. His manifesto on cities, contained in two books, The City of Tomorrow and its Planning (1925) and The Radiant City (1933), called for a dramatic break from the past: ‘The existing centres must come down. To save itself every great city must rebuild its centre’.

He wanted ever taller towers, some housing as many as 40,000 people. When he visited New York for the first time, he came away disappointed by the scale of the buildings. ‘Your skyscrapers are too small,’ he told a surprised journalist from the Herald Tribune.

By building upwards, two problems would be resolved at a stroke: overcrowding and urban sprawl. With room enough for everyone in towers, there would be no need for cities to spread outwards and devour the countryside in the process. ‘We must eliminate the suburbs,’ recommended Le Corbusier. 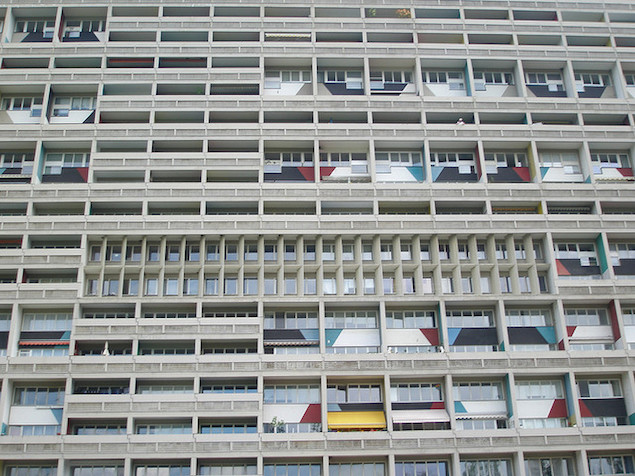 Simultaneously, Le Corbusier planned to abolish the city street. In his vision of the future city, people would have footpaths all to themselves, winding through woods and forests (‘No pedestrian will ever meet an automobile, ever!’), while cars would enjoy massive and dedicated motorways, with smooth, curving interchanges, thus guaranteeing that no driver would ever have to slow down for the sake of a pedestrian.

Even more than Paris, New York was for Le Corbusier the epitome of an illogical city, because it had managed to graft skyscrapers, the buildings of the future, onto a tight street plan better suited to a medieval settlement. On his trip around the United States, he advised his increasingly bemused American hosts that Manhattan ought to be demolished to make way for a fresh and more ‘Cartesian’ attempt at urban design. 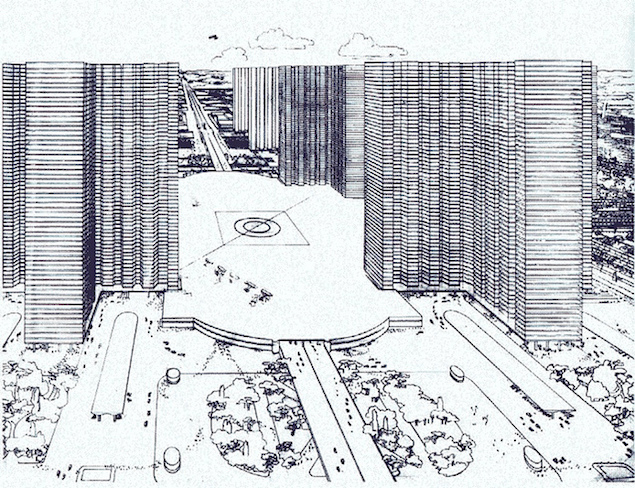 Le Corbusier hated mixed use: all functions would now be untangled. There would no longer be factories, for example, in the middle of residential areas, thus no more forging of iron while children were trying to sleep nearby. The new city would be an arena of green space, clean air, ample accommodation, and flowers – and not just for the few but, as a caption in The Radiant City promised, ‘for all of us!!!’

Ironically, what Le Corbusier’s dreams helped to generate were the dystopian housing estates that now ring historic Paris, the wastelands from which tourists avert their eyes in confused horror and disbelief on their way into the city. To take an overland train to the most violent and degraded of these places is to realise all that Le Corbusier forgot about architecture, and in a wider sense, about human nature. 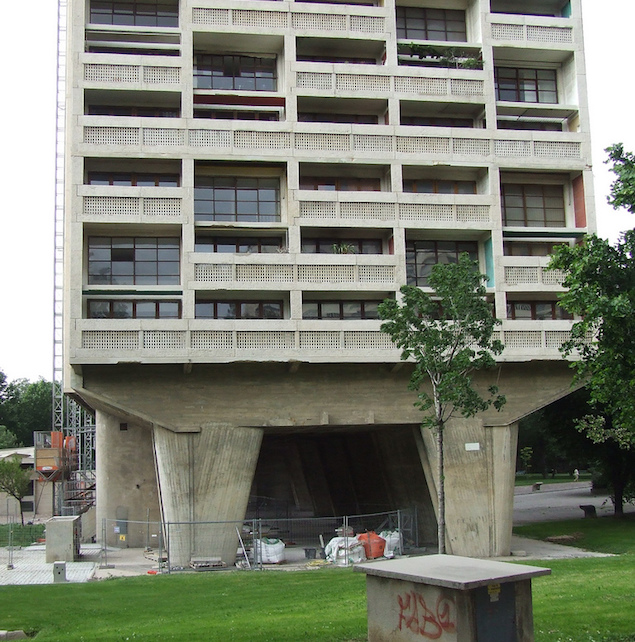 For example, he forgot how tricky it is when just a few of one’s 2,699 neighbours decide to throw a party or buy a handgun. He forgot how drab reinforced concrete can seem under a grey sky. He forgot how awkward it is when someone lights a fire in the lift and home is on the forty-fourth floor. He forgot, too, that while there is much to hate about slums, one thing we don’t mind about them is their street plan. We appreciate buildings which form continuous lines around us and make us feel as safe in the open air as we do in a room.

In his haste to distinguish cars from pedestrians, Le Corbusier also lost sight of the curious co-dependence of these two apparently antithetical forces. He forgot that without pedestrians to slow them down, cars are apt to go too fast and kill their drivers, and that without the eyes of cars on them, pedestrians can feel vulnerable and isolated. We admire New York, precisely because the traffic and crowds have been coerced into a difficult but fruitful alliance. 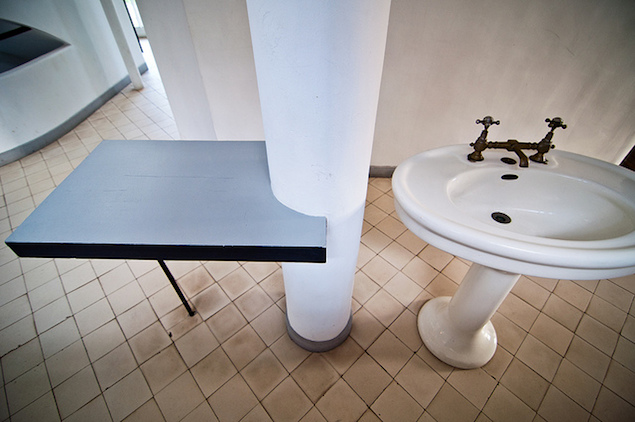 When Le Corbusier died in 1965, having had a heart attack in the South of France where he’d gone for a swim, he was responsible for building some of the most beautiful private houses of all time. His ideas had also destroyed some of the great cities of Europe and the United States. For a man whose ambition was to change the world, we can revere him – paradoxically – for the more modest things about him: his beautiful white washed villas, door handles and armchairs.