On Commuting - The School Of Life

It is six o’clock on a late-February morning, in a village fifty kilometres from London, in the Berkshire countryside. To define what is painfully coming to an end, thanks to the pitiless insistence of an electronic beep, as ‘being asleep’ doesn’t scratch the surface of what has really been going on for the last seven or eight hours in thousands of different dreams, animated by unexpected faces and emotions. 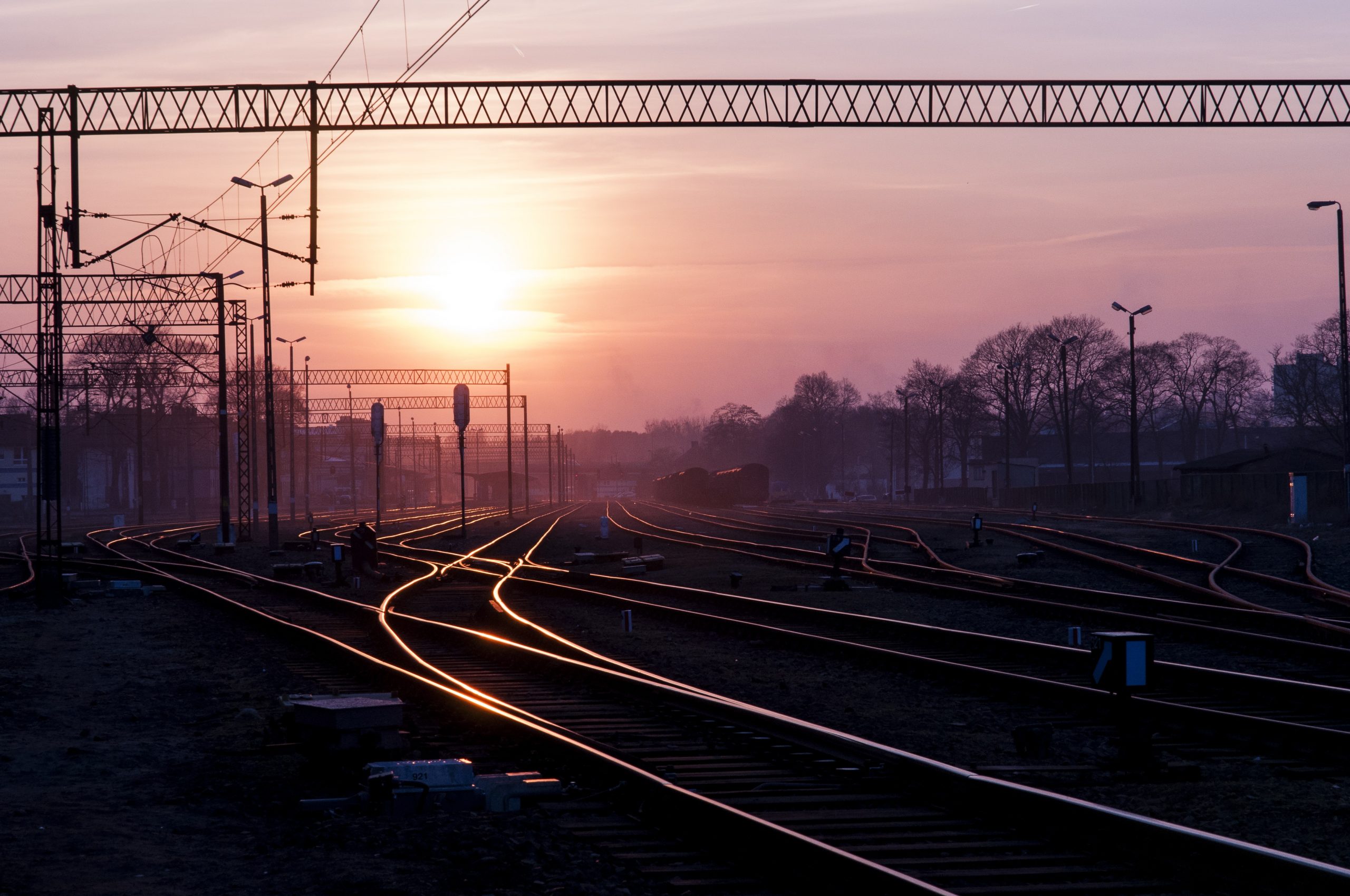 How quiet the nation was only forty-five minutes ago, and yet how much hair-rinsing, necktie-tying, key-searching, stain-removing, child-goading and spouse-shouting will occur over the next thirty, in homes within a gigantic circle drawn around the English capital, from Folkestone to Aylesbury, from Haslemere to Chelmsford.

Eventually, there comes the scramble for bags and coats and the walk in the chill air to the train station. Once outside, it seems extraordinary that the natural world should still exist and be so apparently undisturbed and serene, so indifferent to human concerns, with a new sky which has wiped away yesterday’s squalls and holds no grudges, a scene of innocent beauty that bolsters any attempt to search within oneself for reserves of resilience and good humour. 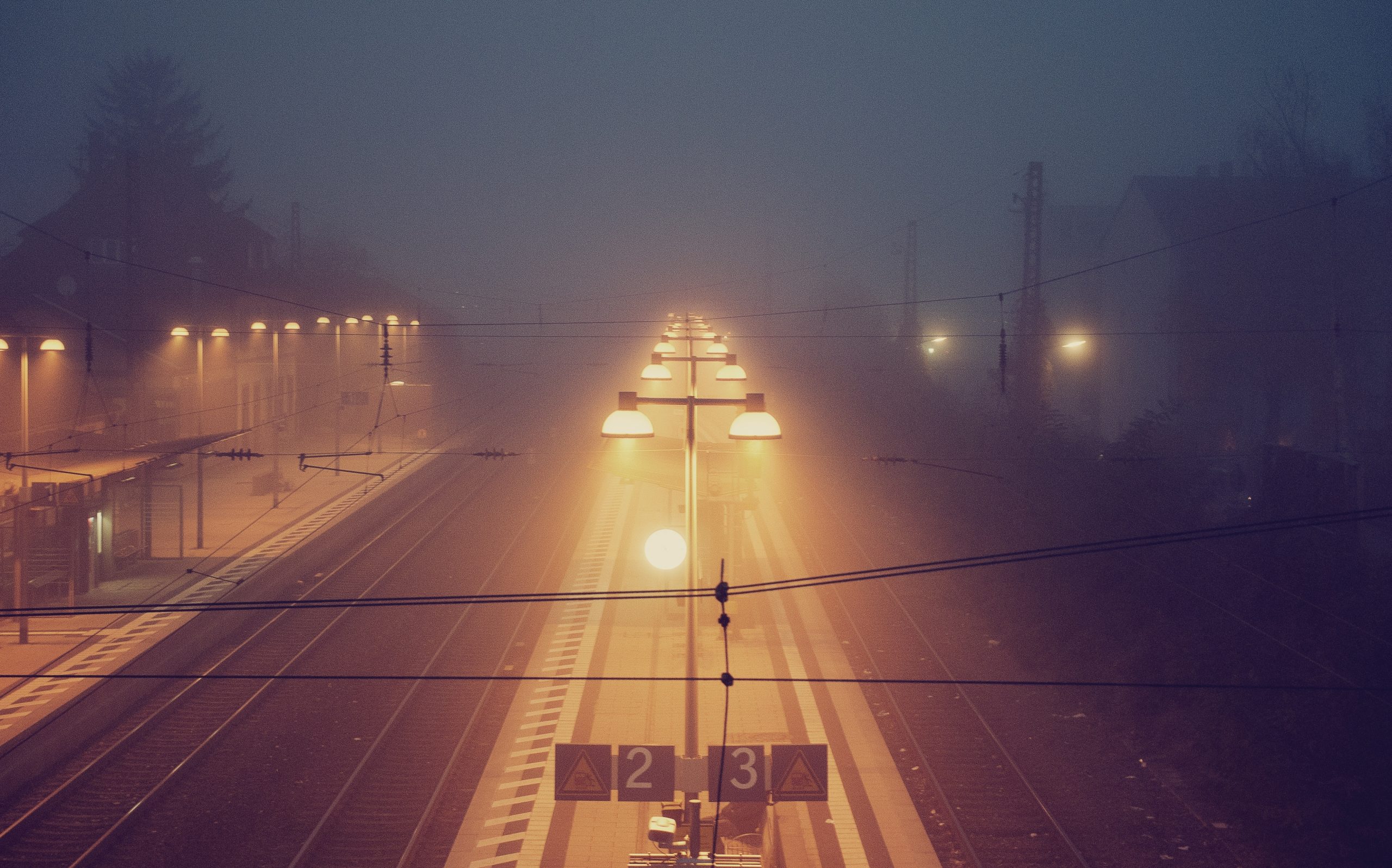 The train will be on time, say the screens at the station. On the platform, under Victorian arches almost spongy with the paint of decades, there are advertisements for West End plays and day excursions to historic castles. A plane crosses high overhead, a veteran of a still earlier departure, perhaps with a child on board at this very moment gazing down and seeing, within the circumference of a window, the full extent of the railway line threading its way from the coast to the city. Back on the ground, from a distance, swaying slightly from side to side, its headlamps on and sparks flashing around its wheels, a green-liveried train comes into view, sounding its toy-like horn against a wide horizon.

Entering the carriage feels like interrupting a congregation. The cold air cuts into daydreams which must have begun far up the line. The settled passengers neither look up nor give any other overt sign of taking notice, but they betray their awareness of any new arrival by dextrously readjusting their limbs to allow them to struggle past them to one of the remaining unoccupied seats. The train moves off, resuming its rhythmical clicking along tracks laid down a century and a half ago, when the capital first began plucking workers from their beds in faraway villages. 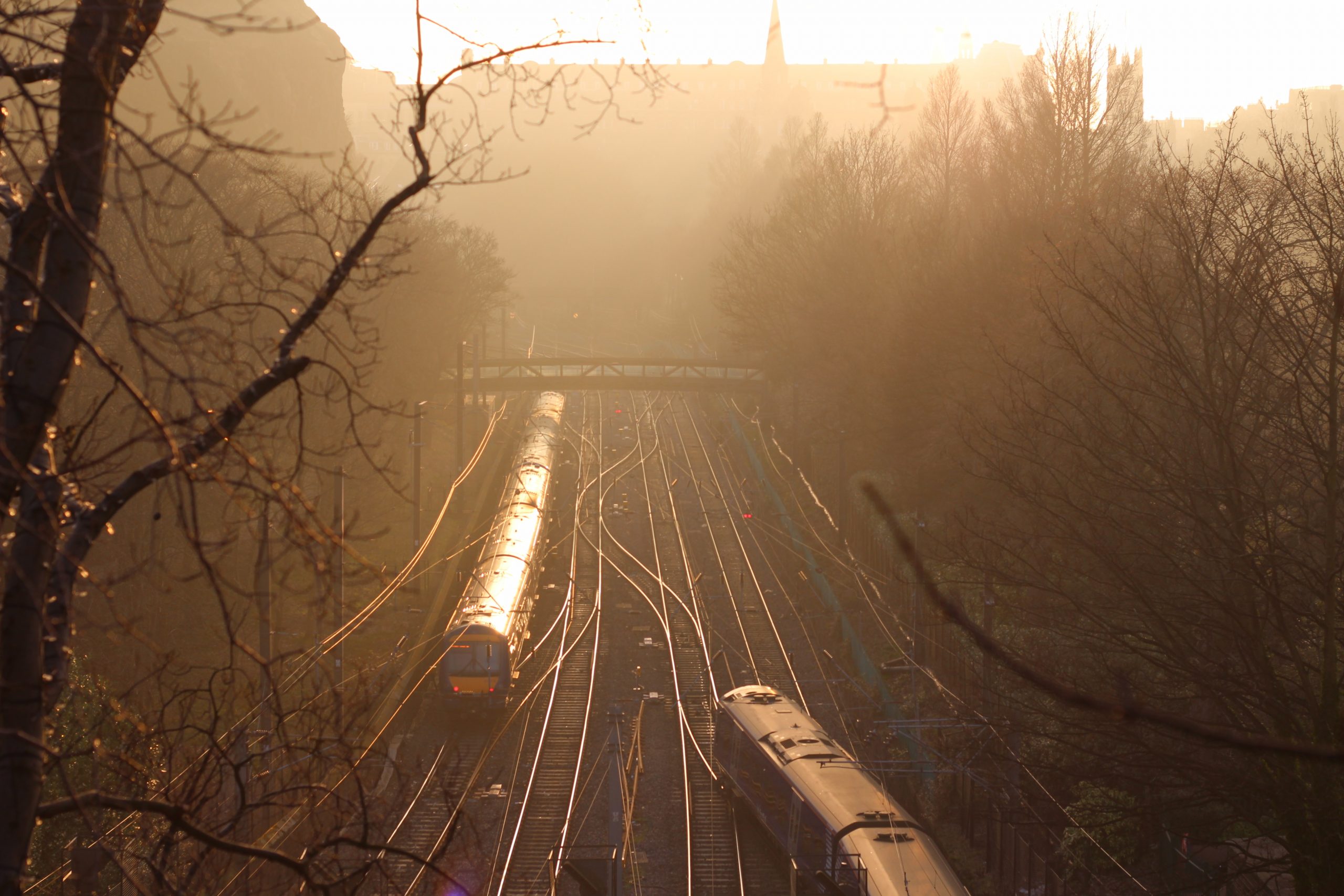 There is something improbable about the silence in the carriage, considering how naturally gregarious we are as a species. Still, how much kinder it is for the commuters to pretend to be absorbed in other things, rather than revealing the extent to which they are covertly evaluating, judging, condemning and desiring each other. A few venture a glance here and there, as furtively as birds pecking grain. But only if the train crashed would anyone know for sure who else had been in the carriage, what small parts of the nation’s economy had been innocuously seated across the aisle just before the impact: employees of hotels, government ministries, plastic-surgery clinics, fruit nurseries and greetings-card companies.

Newspapers are being read all around. The point is not, of course, to glean new information, but rather to coax the mind out of its sleep-induced introspective temper. To look at the paper is to raise a seashell to one’s ear and to be overwhelmed by the roar of humanity. Today there is a story about a man who fell asleep at the wheel of his car after staying up late into the night committing adultery on the internet – and drove off an overpass, killing a family of five in a caravan below. Another item speaks of a university student, beautiful and promising, who went missing after a party and was found in pieces in the back of a minicab five days later. A third rehearses the particulars of an affair between a tennis coach and her thirteen-year-old pupil. These accounts, so obviously demented and catastrophic, are paradoxically consoling, for they help us to feel sane and blessed by comparison. We can turn away from them and experience a new sense of relief at our predictable routines; we can be grateful for how tightly bound we have kept our desires, and proud of the restraint we have shown in not poisoning our colleagues or entombing our relations under the patio.

Familiar vignettes stream by outside: a power station, a patch of waste ground, a postal depot, a copse of ancient trees, a group of schoolgirls in grey-and-blue uniforms, a band of cumulus clouds spreading from the west, a shopping mall across a motorway, some underwear swaying on a line, and then gradually, the backs of suburban villas, heralding the train’s arrival into central London itself. 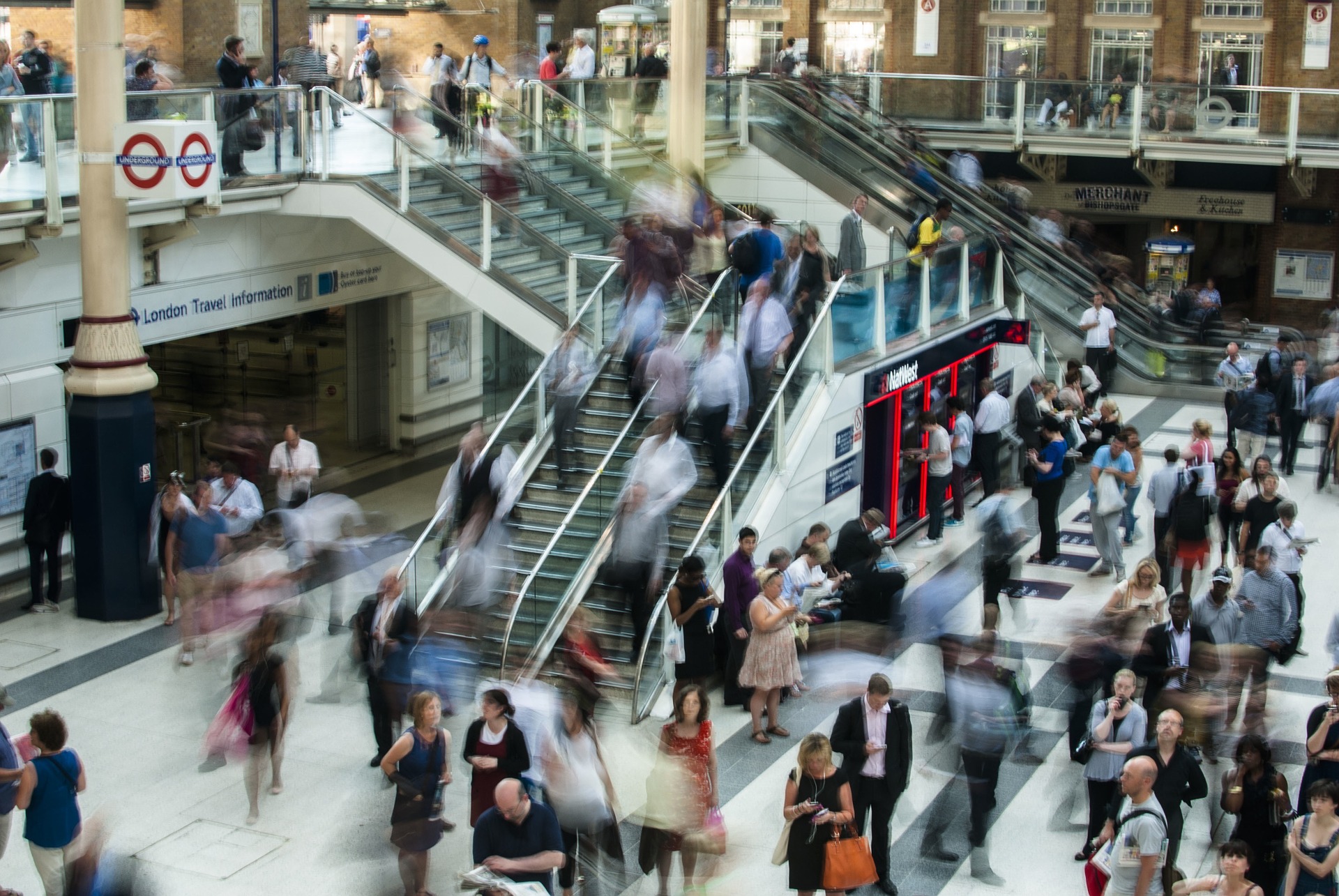 Employees are already beginning to course through the plate-glass doors of countless offices. They have stepped off railway carriages at Victoria and Farringdon, London Bridge and Waterloo, driven through tunnels, been rattled by diesel buses, run down airport concourses, jogged across parks and cycled over hills and high streets. What varied breakfasts they have eaten, too. Danish pastries, the remains of last night’s curry, sausages, scotch eggs and bowls of Cheerios and Coco Pops.

To feel at home in an office is not to notice the strange silver sculpture in the lobby and to forget how alien the place felt on the first day. The start of work means the end to freedom, but also to doubt, intensity and wayward desires. Our ten thousand possibilities are reduced to an agreeable handful. We have a business card which we hand over in meetings and which tells other people – and, more meaningfully perhaps, reminds us – that we have a place in this world and are not just a vaporous transient consciousness in an incidental universe. How satisfying it is to be held in check by the assumptions of colleagues, instead of being forced to contemplate, in the loneliness of the early hours, all that one might have been and perhaps never will be.

There might be a meeting scheduled for nine-thirty, leaving time for a muffin and coffee. The start of the day in the office has burnt off nostalgia as the sun evaporates a coat of dew. Life is no longer mysterious, sad, haunting, confusing or melancholy; it is a practical stage for clear-eyed action.