Cy Twombly - The School Of Life

Abstract art continues to provoke annoyance and confusion in equal measure. You know the kind of thing: a large empty white canvas, with a solitary deep black line down the middle. A splodge of purple paint against a yellow background. Ten steel beams arranged in a random pile. What does it mean? Is someone making fun of us? A child could have…

To adopt a more sympathetic approach (which can be useful and fair), we need to go back to first principles and ask: what’s so good about not showing what things look like? The central intention in abstract art is to get directly to emotion and to bypass representation. Like music, abstract art is best interpreted as echoing, or giving a form to, certain of our inner states or moods. Some might be relatively straightforward, like ‘calm’ or ‘anger’, and others will defy easy definition in language. It is therefore not very helpful to say: this painting doesn’t look like anything. It is true that it doesn’t look like anything in the outer world, but that’s because the intention is to represent the inner one. We should be asking: what does this work feel like? Does it evoke any of my emotional states? What piece of mankind’s inner landscape is being summoned?

The great abstract artist, Cy Twombly, was born in 1928 in the pretty, ultraconservative town of Lexington, Virginia. His father had been a pitcher for the Chicago White Sox –  in UK terms today the equivalent of being a premier league footballer. The artist was actually christened Edwin Parker Twombly but became known as ‘Cy’ in honour of one of the most prominent figures in the history of baseball, Cy Young. He went to Darlington School – a smart, expensive private school. Eventually he made his way to study art in New York in the early 1950s and then spent a year touring round the Mediterranean. The journey changed his life. He found himself an aristocratic girlfriend, moved to Rome and inaugurated his trademark abstract style. 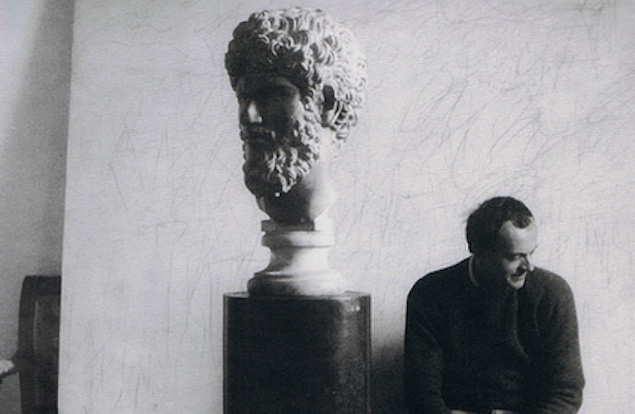 He hadn’t left reason behind. He was deeply alive to the lessons of Roman and Renaissance art. What he wanted to do was give form to the inner states of humankind, just as the ancient masters had represented our outer ones. 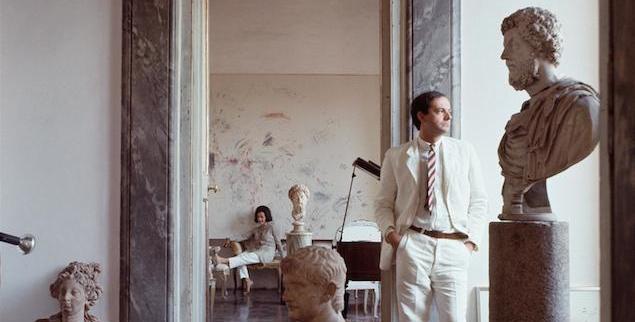 Cy in Rome, with aristocratic girlfriend

Take his Panorama of 1955, now in the Museum of Modern Art in New York. We can’t see the marks precisely, but they fill the canvas, like mysterious script on a blackboard. We are held at the moment of being on the cusp of something. We are about to understand, but have not yet understood. 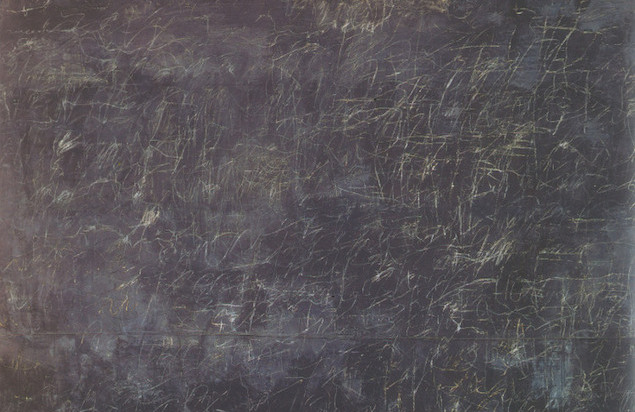 Twombly’s work is like a specially designed mirror of a part of our inner lives, deliberately constructed to draw attention to it and to make it clearer and easier to identify. This work homes in on what it is like when you almost know what you think about something but not quite. It pictorialises a moment in reflective life, suggestive of ambition and confusion.

It shouldn’t surprise us in any way that Twombly loved figurative, representational art. His favourite artist was the 17th-century painter Poussin (who also lived in Rome). But he wanted to do something else in his own work: 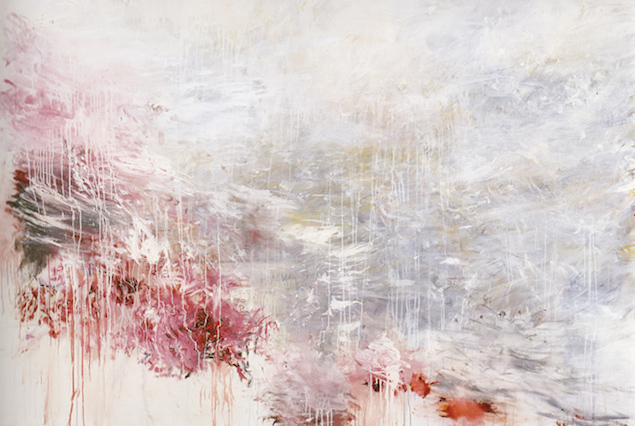 The title of this painting, Hero and Leander, makes reference to a tragic couple in Classical Greece. Leander used to swim three kilometres each night across the Hellespont to meet his lover (Lord Byron tried it too and now there’s a club). But Twombly hasn’t tried to show us the dripping torso or the treacherous moonlit waves, as Poussin would have done. Instead he has made a picture of what a certain feeling of love is like – the feeling, perhaps, of knowing that the person you love is making great efforts to get to you, or the sense that someone you love is desperately longing to make contact with you. It is a work of drama and passion, showing without representing. Gazing at the intricate, soft, swirling surface, one is drawn into a precious sense of the price of love.

Twombly’s career was devoted to making portraits of inner life so that we might learn to communicate its fruits to other people. Getting others to share our experiences is notoriously difficult. Words can feel clumsy. This is more elegant: 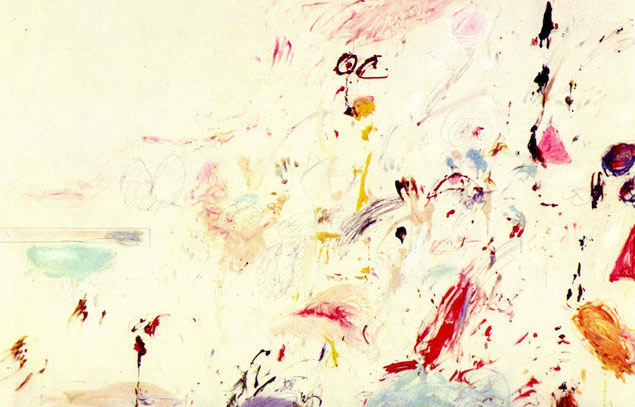 One might simply say to a close friend: ‘Inside, it feels a little like this.’ And they would understand. Apart from abstraction, Twombly had a tendency to go in for some very simple looking bits of writing. 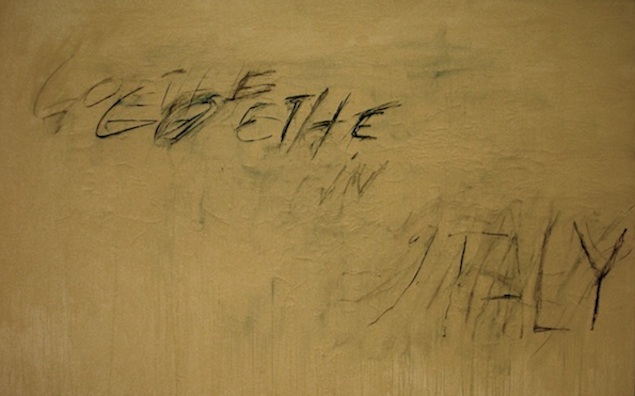 It’s a bit like a note to oneself – half-doodled on the back of a company report – a phrase, an idea, that’s come into one’s head, but doesn’t yet have a definite meaning.

It looks like graffiti – something scrawled on a neighbour’s wall to give offence, to express anti-social aggression. But in Twombly’s hands, that urgency, the excitement and daring, the risk taking, the readiness to cause offence and upset people’s comfortable expectations – are being deployed in the name of wise cultivation, of true self-development of the enlargement and refinement of the spirit (all things for which ‘Goethe in Italy’ is shorthand). It’s a reminder of what we should think about, and pay attention to, far more than the slogans and brand names we are otherwise continually exposed to.

Cy Twombly died in 2011 in his beloved Rome. He was 83 – and had lived to see his works gain immense prestige and appreciation among those whose opinions he respected.

His paintings are simultaneously about nothing – and about everything that is most powerful, private and hitherto incommunicable but important within us. He will last – as long as some of those great Romans he so deeply admired. 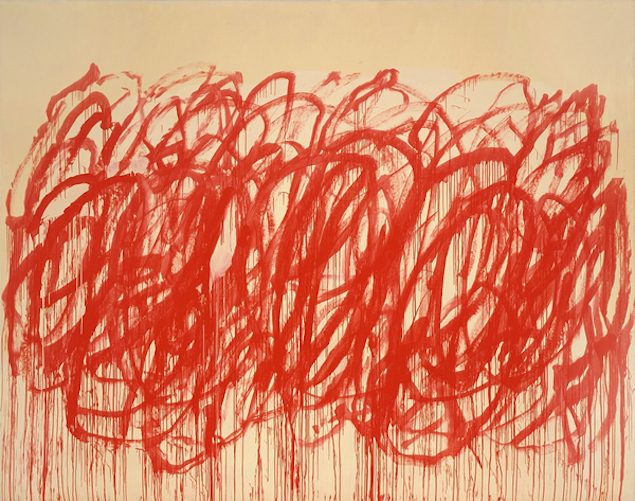