What Is Literature For?

One of the more frustrating, yet fundamental, things about being human is that we can’t understand ourselves very well. One side of the mind frequently has no clear picture of what the other happens to be upset about, anxious around or looking forward to. We make a lot of mistakes because of our pervasive self-ignorance.

Here literature can help, because in many cases, it knows us better than we know ourselves and can provide us with an account, more accurate than any we might have been capable of, of what is likely to be going on in our minds.

Marcel Proust wrote a long novel about some aristocratic and high bourgeois characters living in early 20th-century France. But towards the end of his novel, he made a remarkable claim. His novel wasn’t really about these distinctly remote-sounding people, it was about someone closer to home, you:

“In reality, every reader is, while he is reading, the reader of his own self. The writer’s work is merely a kind of optical instrument which he offers to the reader to enable him to discern what, without this book, he would perhaps never have experienced in himself. And the recognition by the reader in his own self of what the book says is the proof of its veracity.”

In some of the best works of culture, we have an overwhelming impression of coming across orphaned bits of ourselves, evoked with rare crispness and tenacity. We might wonder how on earth the author could have known certain deeply personal things about us, ideas that normally fracture in our clumsy fingers when we try to take hold of them, but that are here perfectly preserved and illuminated. Take, for example, the self-knowledge offered by one Proust’s favourite writers, the 17th-century philosopher, Le Duc de La Rochefoucauld, the author of a slim volume of aphorisms known as the Maxims:

It’s an idea closely followed by the equally penetrating:

We are likely to smile in immediate recognition. We have been here ourselves. We just never knew how to condense our mental mulch into something this elegant.

When Proust compares literature to ‘a kind of optical instrument’, what he means is that it is a high-tech machine that helps us to focus what we understand of ourselves and others around us. Great authors turn the vague into the clear. For example, once we have read Proust, and are then abandoned by a lover who has kindly droned on about their need to spend ‘a little more time on their own’ because they are ‘so messed up’, we will benefit from seeing the dynamic a bit more clearly, thanks to Proust’s line: “When two people part it is the one who is not in love who makes the tender speeches.” The clarity won’t make the lover return; but it will do the next best thing, help us to feel less confused by, and alone with, the misery of being ditched.

The more writers we read, the better grows our understanding of our own minds. Every great writer can be hailed as an explorer – no less extraordinary than a Magellan or Cook – into new, hitherto mysterious corners of the self. Some explorers discover continents, others spend their lives perfectly mapping one or two small islands, or just a single river valley or cove. All deserve to be feted for correcting the ignorance in which we otherwise meander through the world. The Japanese poet Matsuo Basho clarifies our feelings of loneliness; Tolstoy explains our ambition to us, Kafka makes us conscious of our dread of authority, Camus guides us to our alienated and numb selves and under Philip Roth’s guidance, we become conscious of what happens to our sexuality in the shadow of mortality.

The 20th-century English writer Virginia Woolf was often ill. But because she was a writer on a mission to clarify our emotions for us, she began – in an exemplary essay called On Being Ill – by lamenting how little we tend to know clearly what illness really feels like. We casually say we’re not well, or have a headache, but we lack a focused vocabulary of illness. There is one large reason for this: because of how little illness has been written about by talented authors. As Woolf remarks: “English, which can express the thoughts of Hamlet and the tragedy of Lear, has no words for the shiver and the headache. The merest schoolgirl, when she falls in love, has Shakespeare or Keats to speak her mind for her; but let a sufferer try to describe a pain in his head to a doctor and language at once runs dry.” That turned out to be one of Woolf’s great tasks as a literary explorer. She brought into focus what it’s like to be tired, close to tears, too weak to open a drawer, irritated by a pressure in one’s ears or beset by strange gurgling sounds near one’s chest. Woolf became the Columbus of illness.

An effect of reading a book which has devoted attention to noticing faint yet vital tremors, is that, once we’ve put the volume down and resumed our own life, we can attend to precisely the things which the author would have responded to had he or she been in our company. With our new optical instrument, we’re ready to pick up and see clearly all kinds of new objects floating through consciousness. Our attention will be drawn to the shades of the sky, to the changeability of a face, to the hypocrisy of a friend, or to a submerged sadness about a situation which we had previously not even known we could feel sad about. A book will have sensitised us, stimulated our dormant antennae by evidence of its own developed sensitivity. Which is why Proust proposed, in words he would modestly never have extended to his own novel, that:

“If we read the new masterpiece of a man of genius, we are delighted to find in it those reflections of ours that we despised, joys and sorrows which we had repressed, a whole world of feeling we had scorned, and whose value the book in which we discover them suddenly teaches us.”

These lines connect up with an equally prescient quote from Ralph Waldo Emerson:

‘In the minds of geniuses, we find – again – our own neglected thoughts.’

It isn’t just ourselves we learn about through culture. It is, also, of course, the minds of strangers, especially those we would not – in the ordinary run of things – have ever learnt much about. With our optical instruments in hand, we get to learn about family life in Trinidad, about being a teenager in Iran, about school in Syria, love in Moldova and guilt in Korea. We get taken past the guards right into the King’s bedroom (we hear him snoring and whispering to his mistress) and the pauper’s hovel, the upper middle class family’s holiday villa and the lower middle-class family’s caravan.

Thanks to all this, we have a golden opportunity to spare ourselves time and error. Literature speeds up years, it can take us a through a whole life a decade per chapter, in a day, and so lets us study the long-term consequences of decisions that – in our own lives – work themselves out with dangerous slowness. We have a chance to see in accelerated form what can happen when you worry only about art and not so much about money, or only about ambition and not so much about your own children; what happens when you despise ordinary people or are disturbingly concerned with what others think. Literature can help us avert mistakes. All those heroes who commit suicide, those unfortunate demented souls who murder their way out of trouble or the victims who die of loneliness in unfurnished rooms are trying to teach us things. Literature is the very best reality simulator we have, a machine which, like its flight equivalent, allows us safely to experience the most appalling scenarios that it might, in reality, have taken many years and great danger to go through, in the hope that we’ll be ever so slightly less inclined to misunderstand ourselves, swerve blindly into danger – and unleash catastrophes. 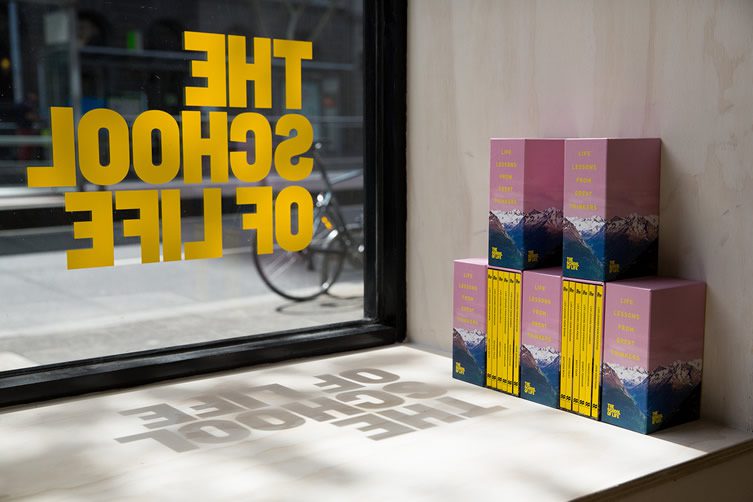 The School of Life: What We Believe

The School of Life is a global organisation with a simple mission in mind: to increase the amount of Emotional Intelligence in circulation. We are seeking more emotionally intelligent kinds of:…

The Importance of Books

Around 130 million books have been published in the history of humanity; a heavy reader will at best get through 6,000 in a lifetime. Most of them won’t be much fun…

What Is the Point of the Humanities?