Our Forgotten Craving for Community - The School Of Life

Our Forgotten Craving for Community

We are, a lot of us, a great deal sadder, more anxious, more incomplete and more restless than we really need to be because of something very large that is missing from our lives. What’s worse, we don’t even know what this thing is and how much we crave it, because we don’t have the right concepts, experience or encouragement to help us locate it. What we long for and are slowly dying without is: community.

They tell us that we are suffering for all sorts of reasons: because we’re afraid of intimacy or are low on serotonin, are beset by anxiety or trauma or are chronically dysfunctional around attachment or trust.

These may be accurate enough descriptions of our symptoms but they arguably leave the real causes of our miseries untouched. To come to the point, it’s worth holding on to a basic historical insight: for most of our time on this planet (by which one really means, for 99% of homo sapiens’s evolutionary existence), we lived in communities. That is, groups of 20 or 30 people who worked together, cooked communal meals, and lived and died around each other. For most of history, we’d watch the sun going down with the same people we knew deeply, trusted, sometimes bickered with but overall felt overwhelmingly connected to. We’d shoot the breeze, we’d comfort each other when we were sad, we’d drop in unannounced on one another’s quarters, we’d chat over our pains and stresses and at special moments, we’d dance together and occasionally fall into ritual ecstatic states where the normal barriers between egos would dissolve.

It’s only very late on in history that we’ve started living in condominiums, commuting to work in offices with people whose values we don’t share and eating for one in cities of ten million strangers. Of course, arguments from evolutionary history aren’t always useful. For most of history we suffered from chronic toothache and didn’t have access to hot baths – but no one would argue against our abandonment of our natural state in these areas. Nevertheless, holding on to the idea that we were once tribal and now most definitely are not can help us to put a finger on something that we may legitimately miss and urgently need to recover a semblance of.

What happens to us outside of life in a tight-knit community? Firstly, we get very concerned – far too concerned – with falling in love with one special person who (we’re told) will end our customary sadness and provide an answer to all our societal needs. Unsurprisingly, this enormous pressure on what a relationship should be is the single greatest contributor to the collapse of unions that might, with more manageable expectations and a more close-knit friendship circle, be entirely viable. We end up having to throw a lot of people away when we want them to be that most cruel of things: everything. Secondly, the very pressure to be in a couple means we bolt into relationships that should never have started and stick far too long inside toxic situations out of terror of singlehood. Thirdly, in our alienated condition, the desire for connection can morph into a longing for extreme success, fame and reknown: we grow materially wildly and insatiably ambitious out of an unquenched emotional need for nothing more esoteric than some good friends. Even if we do have some, they’re liable to be scattered around the world, cocooned in their own relationships or unavailable to us most of the time: we’ve let our terror of intruding on one another scupper a yet more precious need for an atmosphere of near-constant mutual assistance. Finally, our picture of what that nebulous category ‘other people’ is like grows very sombre because we meet one another not in person, but via the media, which constantly gives us cause to believe that other people are fundamentally mad, extreme, dangerous and cruel.

Even though we collectively pride ourselves on living in highly innovative times, we remain absurdly traditional in thinking about social set ups. We have a million new apps a year, but no one ever seeks to reinvent how people might live together. Sadly but understandably, communes don’t have a good reputation: one thinks of religious extremists, weird fanatics and messianic leaders. None of the genuine advantages of bourgeois life or simply of reasoned existence seem compatible with communal living. Furthermore, everything legal and commercial seems set up to frustrate any wish to live together: land costs a fortune, building is only for the very brave or the naive, how would one work, who would do the laundry, what would everyone think…?

Nevertheless, it’s worth pushing the imagination a little, and sidestepping some of the practical hurdles for long enough to get the mind working (the material questions can always be solved once an idea properly takes root).

Imagine, for a moment therefore, what it would be like to live in an ideal kind of community. It might be an elegant set of buildings in a desert or on the edge of a forest. Everyone would have a room, twenty or thirty in all, modest but dignified, laid out amidst an array of charming communal areas. Breakfast, lunch and dinner (simple and nutritious) would be eaten in company at long tables. There’d be a commitment to look after one another, and fellowship based around shared ideals and values. The craving to ‘get ahead’ would subside: it would be enough just to be accepted by this group. This would be one’s tribe – to whom one would open one’s heart and entrust a substantial part of one’s life. We’d have a joint sense of what meaningful labour was and some of the most important work would be offering one another reassurance. We might have partners, but we wouldn’t expect them to be everything; a chance to share thoughts and emotions with others would take a lot of the pressure off couples. We’d have a daily impression of mattering to people. Our impulses to addiction, power and paranoia would lessen. We’d rarely go online.

The point isn’t, right now, to have an exact blueprint for a commune but to wake ourselves up to our desire for one; after which everything can flow. Our ancestors were unfortunate in a thousand ways, but they may well have had something we’re unknowingly dying for: their own tribe. 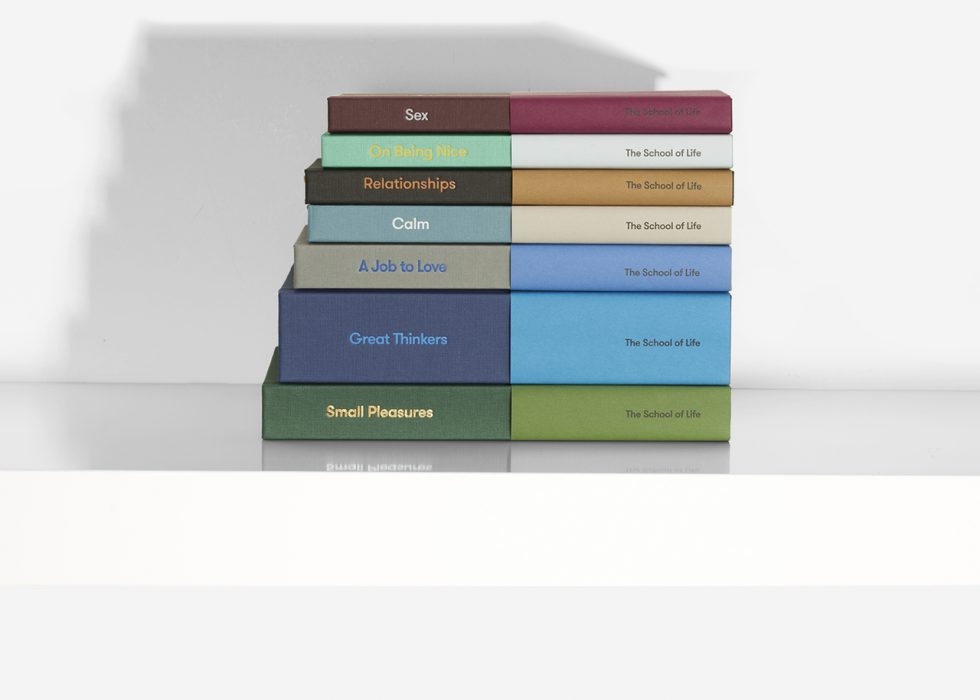 The School of Life Library Out of stock