It doesn’t seem to make sense to suggest that there might be such a thing as ‘good materialism’: after all, surely materialism is just plain bad? When people want to pinpoint the root cause of corruption in our age, they generally only need to point the finger at our attachment to material things. We’re apparently sick because we’re so materialistic.

It can seem as if we’re faced with a stark choice. Either you can be materialistic: obsessed with money and possessions, shallow and selfish. Or, you can reject materialism, be good and focus on more important matters of the spirit.

But most of us are, in our hearts, stuck somewhere between these two choices, which is uncomfortable. We are still enmeshed in the desire to possess – but we are encouraged to feel rather bad about it.

Yet, crucially, it’s not actually materialism – the pure fact of buying things and getting excited by possessions – that’s ever really the problem. We’re failing to make a clear distinction between good and bad versions of materialism.

Let’s try to understand good materialism through a slightly unusual route: religion. Because we see them as focused exclusively on spiritual things, it can be surprising to note how much use religions have made of material things. They have spent a lot time making, and thinking about scrolls to hang in your house, shrines, temples, monasteries, art-works, clothes, ceremonies.

However, they have cared about these things for one reason only – because they have wanted material things to serve the highest and noblest purpose: the development of our souls. It is just that they have recognised that we are incarnate sensory bodily beings – and that the way to get through to our souls has to be, at least in part, through our bodies (rather than merely through the intellect).

The importance of material things was, for centuries, at the core of Christianity, which proposed that Jesus was both the highest spiritual being, and a flesh and blood person: he was the spirit incarnate; holiness embodied.

Jesus tells his followers about his theory of good materialism: transubstantiation: Vicente Masip – The Last Supper 1562

In the Catholic Mass, great significance is accorded to bread and wine, which are believed to be transubstantiations of Christ; that is, material objects which simultaneously have a spiritual identity, just as Jesus himself combined the spiritual and the bodily while on earth.

This can sound like a very weird and arcane point entirely removed from the local shopping mall – but exactly the same concept actually applies outside of religions. Many good material possession can be said to involve a kind of ‘transubstantiation’, whereby they are both practical and physical and also embody or allude to a positive personality or spirit.

Take the Cartier Tank watch. To the outer eye, it is an ordinary time-piece, but at a psychological level, it is also a kind of transubstantiation. It tells the time, while subtly hinting at more psychological or even spiritual ideals of purity, simplicity and harmony. It tells us how long there is till lunch, while gently trying to nudge us towards being a certain sort of person. 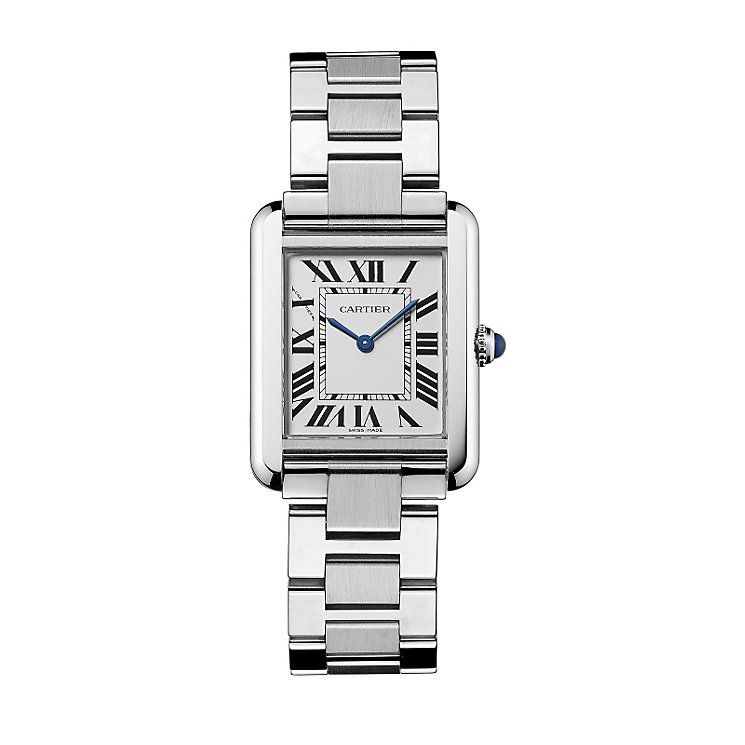 Or take this chair.

It too ‘transubstantiates’ a set of important values: straightforwardness, strength, honesty and elegance. By getting closer to the chair, we stand to become a little more like it, which is an important piece of inner evolution.

Material objects can therefore be said to play a positive psychological (or spiritual) role in our lives when higher more positive ideals are ‘materialised’ in them, and so when buying and using them daily gives us a chance to get closer to our better selves. When they are contained in physical things, valuable psychological qualities that are otherwise often intermittent in our thoughts and conduct can become more stable and resilient.

This is not to say that all consumerism just conveniently turns out to be great. It depends on what a given material object stands for. An object can transubstantiate the very worst sides of human nature – greed, callousness, the desire to triumph – as much as it can the best. So we must be careful not to decry or celebrate all material consumption: we have to ensure that the objects we invest in, and tire ourselves and the planet by making, are those that lend most encouragement to our higher, better natures.

Business is focused on addressing a multitude of human needs; for everything from Jelly Babies to cardiac surgery to nuclear technology to hand soap dispensers. Because human needs are so wide…

The Entrepreneur and the Artist

The entrepreneur is one of the key figures of the modern economy, though what an entrepreneur does is perhaps not entirely properly understood. There are certain conspicuous activities of entrepreneurship: raising…